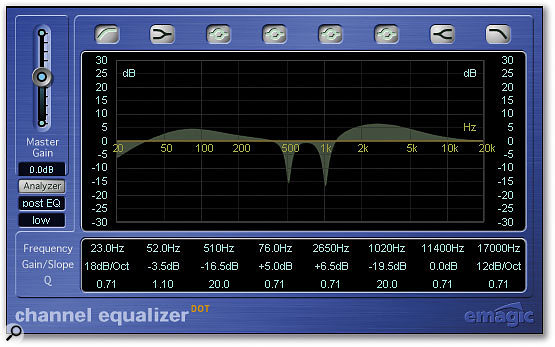 Here you can see an EQ plot typical of a kick-drum salvage job. High-pass filtering has cut out excessive subsonic excursions; a couple of narrow notches have helped to excise the fundamental and first harmonic of a nasty pitched resonance; and broader-band peaking filters have been used to add weight and increase beater definition.

Is the sound of your kick drum letting the rest of your mix down? In which case, find out how to snatch victory from the jaws of defeat with this bass drum processing workshop.

A lifeless kick-drum sound can bring down the energy level of your whole track, especially if you work in one of the many uptempo rock, pop or dance styles. Despite the importance of this one sound, however, surprisingly few of the tracks we receive for our Demo Doctor and Business End columns really nail it. Fortunately for Logic users, though, there are a large number of tools available which can help polish (and salvage!) lacklustre kick tracks, whether they're part of a live kit sound, or a sample running from a MIDI module or virtual instrument.

The first thing most novice mixers do when approaching a duff kick track is to reach for the EQ, and nine times out of ten they do the wrong thing with it. Usually this means a boost with a low-frequency bass shelving filter, which is almost always counterproductive — most woolly and badly-defined bass drum sounds simply get woollier. Unless you're taking a specific decision to have a very sub-heavy kick sound (in which case you'll need to adjust your bass sound accordingly to fit with it), it's often a good idea to high-pass filter the low-frequency extreme. Extreme low frequencies won't be very audible on all but the largest playback systems, and they take up a lot of the headroom in audio signals. Reducing this subsonic energy a little leaves more room for the slightly higher frequencies which make bass instruments more subjectively apparent on the wider range of real-world listening systems. It's for this reason that I'd suggest most home studio owners keep the SubBass plug-in at arm's length, especially for kick drums, where it simply doesn't respond quickly or cleanly enough to be genuinely useful.

You can filter out undesirable subsonic audio with the Channel EQ's built-in low-cut filter — even if you set it to 6dB/octave at 20Hz it can usefully clear up muddiness, but you'll probably need to increase the frequency or the slope to tackle all but the most benign problems. I'd leave the Q setting at its 0.71 default, though, as this should keep the roll-off curve fairly benign. If you start adding resonance to try to boost the frequencies above the cutoff point, you'll get smearing of the low-end kick frequencies, which will tend to make the sound less tight. I find that it's better to use a peaking filter instead if you want to add weight, keeping it above about 60Hz — remember that all EQ affects frequencies to either side of its stated frequency, so if you stray too low then you're asking for trouble.

The only time I might be tempted to use a higher-resonance peak is above about 1.5kHz, to emphasise the click of a bass drum pedal or to help a sound which is struggling to cut through the mix. However, in practice it's almost always better to stick to broadband boost, with a Q value of not more than about one. On the other hand, high-Q cuts are perfectly acceptable, especially if there's a resonance in the sound which is ringing on after each hit and cluttering the mix. In the case of pitched ringing, you may need a series of notches to deal not only with the fundamental frequency, but also its harmonics. In other words, if there's a ringing at 350Hz, you may need to notch at 700Hz and even 1050Hz as well.

With all of these EQ suggestions, bear in mind that if your kick drum is part of an acoustic kit performance then you should EQ the kick while also listening to any other mics through which the kick is picked up (such as the overheads in most cases). You should also try flipping the phase of different drum channels using the Gainer plug-in so that you can check that phase cancellation isn't at the root of your problems.

Of those studio owners who can handle their EQ controls, a surprising number fall at the compression hurdle. This is usually because they underestimate the importance of attack and release time settings. Unfortunately, both of Logic's Compressor plug-ins open with an attack time of zero milliseconds, which will do a great job off planing off attack transients in your drum sound — not a good idea if you're trying to use compression to get a punchier sound!

So the first thing to do in the Compressor or Silver Compressor plug-in window is increase the Attack parameter to at least 20ms. I'll usually then set up something like a 2:1 Ratio and set the Threshold for just a few decibels of gain reduction. This setting does a good job of adding punch, but the Attack setting is crucial to getting the best effect — the key is to experiment with it, listening for how it affects the drum's low-end weight, because too short an attack time will rob you of 'oomph'. It's also worth mentioning that the Limiter and Adaptive Limiter plug-ins aren't much use for drum mixing, as they have no real attack control.

Although full-band compression can be quite effective, I've actually found that there are better plug-in dynamics tools to reach for when salvaging limp-sounding kick tracks. The first of these is the Enveloper plug-in. You may have already tried it and dismissed it, because it can lead to a slightly unnatural sound if inserted directly into the kick track. However, there is a much better way to use it. Make a copy of the kick track, and insert an Enveloper plug-in before the Channel EQ in that channel, leaving the original kick track as it is. The idea is to use the Enveloper channel to add the attack elements which the main channel is missing. 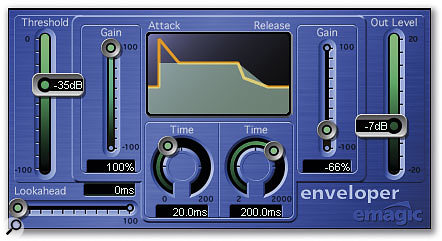 Here's a setting for when you're using Logic's Enveloper plug-in in a separate channel to add attack elements to a sound. Such an extreme setting sounds pretty unlistenable on its own, but it can produce amazing improvements in attack when mixed back in with the main bass-drum channel. Notice that the Lookahead parameter has been set to zero to avoid phasing problems and the Out Level has been reduced to avoid clipping.

First, solo the Enveloper channel and dial in some fairly extreme settings to increase the attack portion of the sound and decrease the release portion, reducing the Lookahead to zero first in order to avoid any phasing between the two tracks — you'll need plug-in delay compensation active in your Audio Preferences as well. The Threshold needs to be high enough to avoid false triggering from any spill on the same track, and you can afford to go pretty wild with the two Gain controls if you like. Just keep an eye on the meter levels to avoid clipping and adjust the Out Level fader accordingly. Now reach for the post-Enveloper EQ, and show no remorse with that either — although steer clear of adding subsonics again. Think of the kinds of frequency areas that the unprocessed kick's attack was most missing, and boost robustly in those regions. If you can't get enough high-end out of the signal, then supplement the Channel EQ with an Exciter plug-in, which can usually supply more high-end than you'll ever need! By this time, you will probably have ended up with something thoroughly vile — a kind of overprocessed 'blip' — but this shouldn't worry you too much, because the main body of the sound is still going to come from the main kick channel.

The next step is to add the processed signal back into the mix. Fade the Enveloper channel all the way down, and turn its solo button off. Now fade it up slowly alongside the main kick track and mix in as much as you need, adjusting Channel EQ and Exciter settings as necessary. Unless you've gone truly ballistic on setting up the plug-ins, you should find that the processed channel simply increases the attack elements where you need them, but decays so quickly that the main kick channel still supplies the main body of the sound.

You can pull a similar stunt using a gating plug-in, such as Noise Gate or Silver Gate, by setting the Attack to its fastest and keeping the Threshold pretty high — just remember still to set Lookahead to zero to avoid phasing problems. The signal that manages to break through the gate can be treated in much the same way as the output of the Enveloper, although the results aren't quite as satisfactory to my ears. And while we're on the subject, you can, of course, use low-range gating or expansion to curtail any messy resonances after each drum hit, which can help make your mixes clearer, especially in faster tunes. 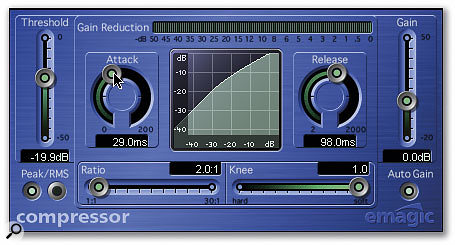 Make sure to increase the Attack parameter in Compressor or Silver Compressor to something above the default of zero, otherwise you'll probably crush the life out of any attack transients.

Although it's easiest to use EQ to add weight to your kick, I find that the Multipressor plug-in does it better, as it also makes this weight a little more consistent and there's less risk of causing subsonic problems. Reduce the number of processing bands to two in the plug-in's Controls view, and then set the crossover point to some point between 60Hz and 100Hz, depending on the kind of weightiness you want to emphasise — and reduce that pesky Lookahead parameter to zero again. Set the low-band ratio to 1.133:1, leaving the high band untouched, and once again remember to adjust the Attack to a sensible setting. Now adjust the low band's compression threshold until you get the desired amount of low-end support. Resist the urge to up the ratio any more if you can, unless you're needing to head into serious remedial territory, and you shouldn't go far wrong with this trick.

As a final tip, if you want to tighten up a flabby sound, you can reverse this technique and apply some expansion to the low band. To start with, set Expansion Ratio to 1.99, Reduction to 6dB, and Expansion to 0dB. Now switch to the Gain Change metering view and reduce the Expansion parameter until the level peaks by around 4dB per hit. The result is that you'll be expanding all but the loudest parts of the drum signal's low-frequency band, which will tighten up the low end. If you're after a less dramatic effect, then back off the Reduction or Threshold parameters ’Äî each will reduce the tightness of the effect in slightly different ways.