I’ve mixed quite a few vocal‑ensemble projects now, and I reckon the fastest way to get decent results is by keeping the per‑singer processing fairly conservative. You see, vocal groups often use a variety of different vocal techniques in the same arrangement, so more targeted processing that suits one part of the timeline often won’t suit another. Moreover, a fairly general‑purpose plug‑in chain can be copied from track to track as a template to speed up your workflow, with only minor tweaks required per channel. 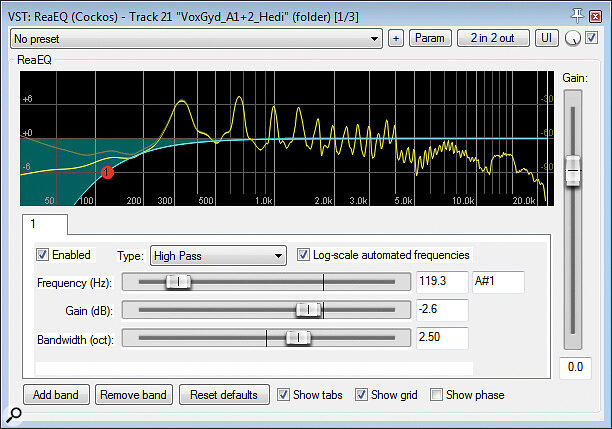 Here, you can see Mike’s per‑singer processing template, which comprised general‑purpose EQ, compression and de‑essing. On each track, the processing was adapted by ear to suit the specific singer (in this case one of the altos).

My basic per‑singer processing chain comprises three plug‑ins: a high‑pass filter; a soft‑knee 3:1 compressor with a moderate release time; and a split‑band de‑esser operating above 6kHz or so. While listening to each part, I’ll adjust the filter frequency, as well as maybe adding another broadband peak above that, the idea being just to reduce unwanted proximity‑effect bass boost and deal with any obvious tonal imbalances. 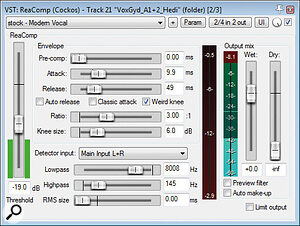 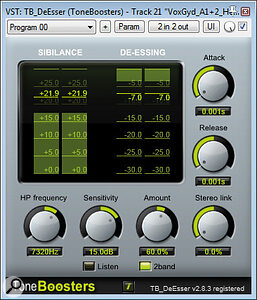 The vast majority of the remaining mix work is just fader automation, and it pays to take a structured approach here. First I’ll balance the singers in each arrangement part in solo (eg. all the sopranos, then all the altos, and so on) so that the individual voices remain consistently blended within their section. By making sure that no individuals stick out of the texture unduly, it ensures that any pitch/timing‑correction artefacts remain obscured within the layered texture.

At this juncture, I’ll also decide on a panning layout for each voice section, and I have a specific tip for this. For each group, create a full‑width stereo image by spacing out the vocalists evenly from wide left to wide right. Then route them all through a stereo group bus and use the dual‑panner mode on the group bus (in other words the panning option where you get independent pan controls for the bus’s left and right channels) to position that evenly spread stereo image wherever you actually want the singers positioned in the final mix. What this means is that it’s subsequently super‑easy to adjust the relative stereo width and position of each voice section as a whole, without having to adjust the pan controls on all the individual singers’ tracks.

After sorting out the panning, you can then move on to the second automation stage: refining the balances between the voice groups throughout the timeline. I usually like to get a decent balance for the final chorus first (or whatever the climactic point of the arrangement happens to be), and then work backwards from there, making sure the balance makes sense for the other choruses, and then filling in the timeline gaps between those.

Your mix will still sound thin to the singers if you don’t enhance the low end in some way, and it’s not that easy to do...

Another important part of modern vocal‑ensemble mixing is bass enhancement. The essential problem is that, if you listen to a choir acoustically, the bass singers don’t actually put out much real low‑end power at all, whereas modern a capella records have much more low‑frequency weight — in some cases directly competing with chart pop releases. Again, most choirs aren’t instinctively aware of this discrepancy (especially the bass singers, whose voices feel plenty bassy to them, because of the physical vibrations within their bodies. But your mix will still sound thin to the singers if you don’t enhance the low end in some way, and it’s not that easy to do because simple equalisation is usually too blunt a tool for the job, given the relatively wide pitch range that choral bass singers can cover. An EQ band that boosts the fundamental frequencies of higher notes might boost muddy‑sounding harmonics on a lower note. 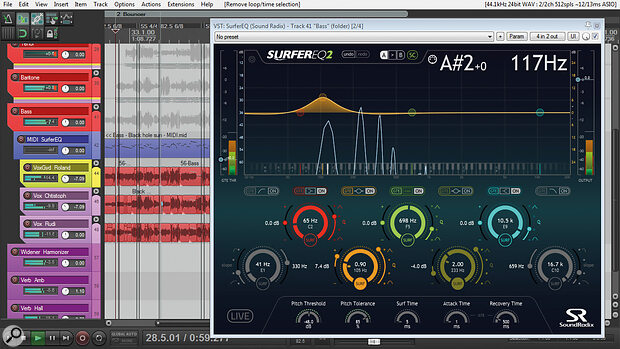 By triggering SoundRadix SurferEQ from the choir’s MIDI guide data, Mike was able to strongly enhance the low‑end power of the bass notes — in line with modern a capella productions.

My preferred processing tactic features two separate plug‑ins on the bass voice group’s bus channel. First I have an instance of Sound Radix Surfer EQ, a specialised plug‑in that can track the pitch of the bass part and reliably boost its fundamental frequency. As with my tuning correction, I don’t let that plug‑in decide for itself what the bass pitch is, but instead control it using the guide arrangement’s MIDI data, so there’s no risk of mistriggering. In addition, I’ll automate the amount of low boost the plug‑in’s applying to suit the demands of the arrangement. As a broad generalisation, I find that higher‑pitched notes tend to need less fundamental frequency boost, because the human body’s own resonance better supports their projection.

Following Surfer EQ, I’ll have a multiband dynamics processor compressing at a 2:1 ratio below about 110Hz, just to even out the boosted low‑end contributions a little — and also to catch any residual plosive pops or other thuds and rumbles that might otherwise impinge upon my overall mix headroom.

Unless you’re going for an overtly artificial sound, there’s not much you should need to do as regards effects, to be honest. A touch of natural‑sounding global ambience will help the singers sound more like they actually performed together — effectively reintroducing a shared room sound that isn’t present in any of the overdubs. Although convolution reverb can be a good choice in that scenario, if you do use it, I’d recommend preceding the reverb plug‑in with a slowly modulating chorus plug‑in set to 100‑percent wet, as I’ve found that choir textures can otherwise occasionally set off metallic‑sounding resonances in the reverb algorithm. Most choirs prefer to have a bit of a reverb tail flattering their sound too, and you can just extend the reverb time of your ambience reverb to supply that if you want. Personally, I prefer to keep those two reverb components separate, generating the tail with an independent hall patch so that I can EQ it as necessary to fit the final mix tonality.

One more global effect you might also consider is a touch of artificial double‑tracking or chorusing, particularly if the ensemble have an ear for modern a capella records, which often use such effects to achieve a smoother, more homogenised texture and an increased stereo width. There are lots of effects that can serve this function, although I personally steer clear of LFO‑modulated patches because cyclic modulation patterns sound a bit artificial to me in this context. I much prefer treatments based around pitch‑shifted micro‑delays, such as those provided by Schwa’s CMX or SoundToys MicroShift.

Remote productions have been a lifeline for maintaining the community spirit of many vocal ensembles, and if you follow the tips I’ve provided in this article, you should get final mixed results that everyone in the group can be proud of — even once we can all finally make music together again in person! 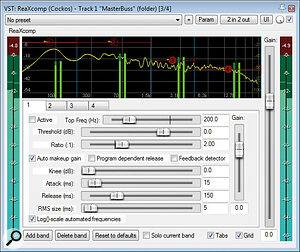 Multiband compression on the master bus provided an efficient way to tackle occasional tonal harshness on certain vowel sounds, as well as smoothing any remaining overbearing sibilance.With a solo vocal recording, it’s possible for certain isolated vowels and/or pitches to sound harsh compared to the rest. In a group vocal setting, the varying harshness levels will thankfully sometimes ‘average out’ across the group, but in some instances they build up to make the overall choir tonality unforgivingly strident.

I’ve tried processing individual singers or voice sections to address this problem, but over time I’ve come to the conclusion that it’s actually more efficient to tackle the problem with multiband compression on the master bus — I’ll start with a 2:1 ratio compression band operating on the 1.5 to 4.5 kHz region. The trick is to set the band’s compression threshold so that it triggers gain reduction only on the harsh‑sounding moments, but does very little processing the rest of the time. You may also discover that similar compression above 4.5kHz proves beneficial, not only for catching sporadic upper‑spectrum harshness components, but also for mitigating any remaining unwanted sibilance. 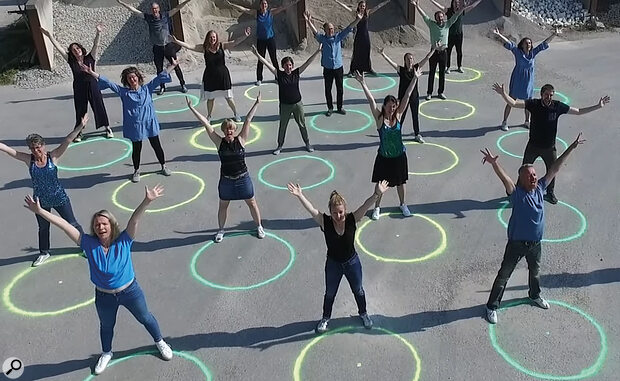 You can hear all the remote vocal‑ensemble productions featured in this article by checking out the Don Camillo Choir’s recent free ‘virtual concert’ online! 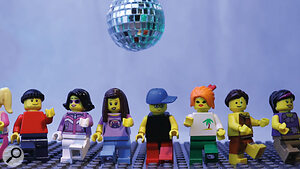 To support this article, I’ve set up a special resources page on my own website. There you’ll find: a full video of a virtual concert by the Don Camillo Choir (for which I edited and mixed five of the arrangements); a comparison video of one of those same arrangements before I started work on it; videos and audio examples of the tuning‑correction, mix‑processing, effects and automation moves discussed in this article; additional screenshots of my mix settings; affordable plug‑in recommendations; and links to further reading.