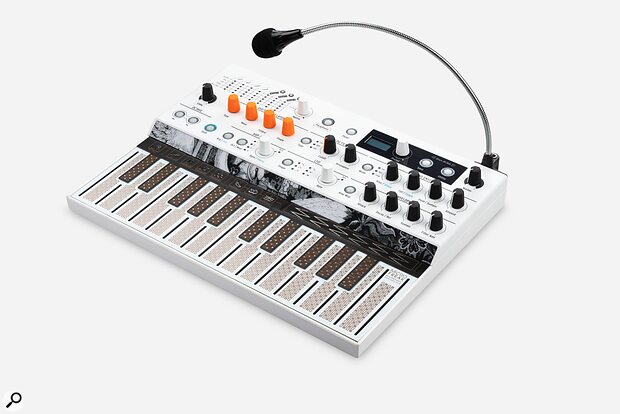 Arturia have released a new version of their compact and versatile Microfreak synthesizer. The Microfreak Vocoder Edition, as the name suggests, boasts a 16-band vocoder and ships with a gooseneck electret microphone. It also sports a swanky new white livery — but there's more to it than that...

A new wavetable oscillator lets you load up your own wavetables, and the synth will ship with a host of ready-rolled wavetables to get you on your way. The sequencer is now capable of working in both Chord and Unison modes as well as monophonically, and you can now also adjust the Wave, Timbre and Shape parameters more quickly by holding down Shift while turning the relevant encoder.

The Microfreak Vocoder Edition is available now, priced at $649.

In other Arturia news, the company have also released a limited edition of their KeyLab 88 MkII master keyboard, in black rather than the usual white. That's also available to buy now, for $1499.