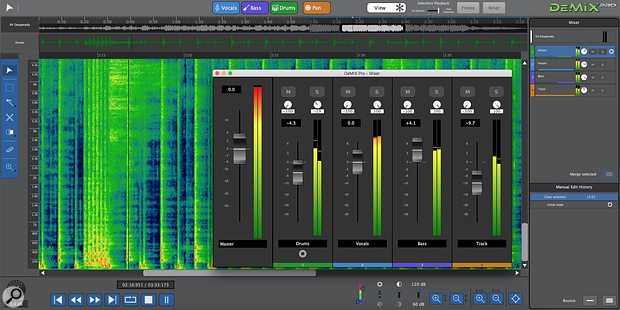 The ability to un-mix a record — that is, to derive separate multitracks from a stereo mix, and be able to mute, solo and process individual instruments at will — has become something of a Holy Grail among software developers. Celemony fired the starting pistol just over a decade ago with their Melodyne DNA technology, which allowed you to change the pitch and amplitude of individual notes in a polyphonic performance, but while Melodyne's focus has always been on correcting recordings, other companies have attempted to dismantle them completely.

Audionamix raised some eyebrows with their original bureau service (the technology they use has since been made available as a user-operated plug-in), while Hit'n'Mix and Zynaptiq have since also joined the fray.

AudioSourceRE are pretty new to the game, but their DeMIX Pro suite impressed us greatly when we reviewed it in SOS March 2019. Like Audionamix's XTRAX software, DeMIX Pro is operated locally but relies on cloud-based processing to achieve its results.

Both are highly capable (within the confines of modern technology), but DeMIX Pro has a few unique selling points. One, which SOS Editor in Chief Sam Inglis found extremely useful, is the ability to separate a vocal from its reverb, even within a mixed track. Another is its powerful pan-based separation: DeMIX Pro can perform source isolation based on an instrument's position in the stereo field (a feat that apparently sounds a lot simpler than it is to implement in DSP!). Indeed, where a mixed track is comprised of mono sources (a DI'd bass, mono drums, single-miked guitar amps and a mono vocal, say), we found it capable of delivering improbably clean separated stems. And where the results aren't ideally clean, DeMIX Pro includes a spectral audio editor for manual finessing. This includes a useful 'harmonic wand', so that once you've identified an instrument for editing, you can manually select it on the spectrograph and the software will automatically lock on to that instrument, as well as all of it harmonics, or partials.

While it's fair to say that we're not quite 'there yet' in terms of totally artifact-free separation, incremental improvements to the technology are being made all the time — and DeMIX Pro's update to version 2 looks like one of the larger leaps. The algorithms that determine bass and drum separation have apparently been improved, and the software now allows you to distinguish between 'lead vocals' and 'all vocals', raising the prospect of unpicking even dense, close-harmony vocal arrangements. Another improvement in v2 is the speed at which DeMix Pro performs its separation — neatly addressing one of our only substantial complaints about the original suite.

Incremental improvements to the technology are being made all the time — and DeMIX Pro's update to version 2 looks like one of the larger leaps.

Of this latest version, AudioSourceRE CEO John O'Connell says: “We are delighted with the separation quality improvements which are offered in both our DeMIX Pro and Essentials products. This update is available to all of our existing customers free of charge. DeMIX as you know is the culmination of almost 20 years of academic and commercial research by Derry into sound source separation technology and our unique algorithms deliver what we believe to be the highest quality STEMs attainable from an existing mix.”

DeMIX Pro 2 is available now, and costs $549 for a perpetual licence, or $24.99 per month/$249 per year on a subscription basis. A cut-down Essentials version is available for just $129. Click the video below to see and hear it in action.