The Minimoog is back for good 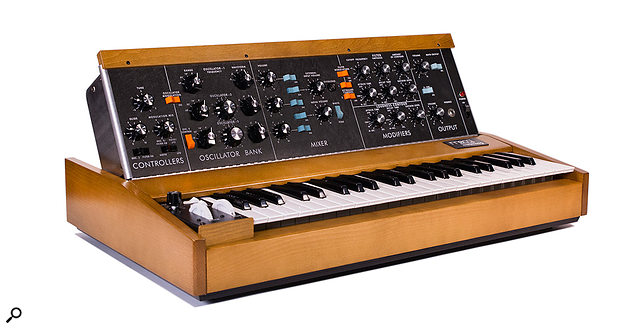 The Minimoog is back. Not in limited quantities. Not as a special edition. The iconic Minimoog Model D — a pilot run of which was demonstrated at Moogfest in May — is now back in full production and you can order one today. It’s certainly not the cheapest option on the market at £3249 apiece but when you consider that vintage examples frequently change hands for more than £4000 and the lengths to which the engineers at Moog have gone in order to make it sound like the original, it looks rather more appealing.

Moog have created almost an exact recreation of the original Model D, the differences being the inclusion of MIDI for note control, CV outputs for Pitch, Gate, Velocity and Aftertouch, as well as the inclusion of a dedicated analogue LFO. The engineers at Moog learned a lot about recreating their own historic products while making the Model 15, System 35 and System 55 in 2015, and have transposed this knowledge into the rebuilding of their most famous design. Through-hole electronics are used throughout, meaning that the old-spec components could once again be used. Moog have even gone so far as to commission special runs of obsolete components from suppliers to try and get the most authentic sound.

We also have a world exclusive first review of the new Minimoog in the upcoiming August issue (out Thursday), which synth expert Gordon Reid pits against his original version from 40 years ago. Pick up a copy to see how it fares!

The Minimoog Model D is available to order now from your local dealer and the first batch will be reaching the public in mid-September. Expect demand to be high, though, so get your orders in quick.