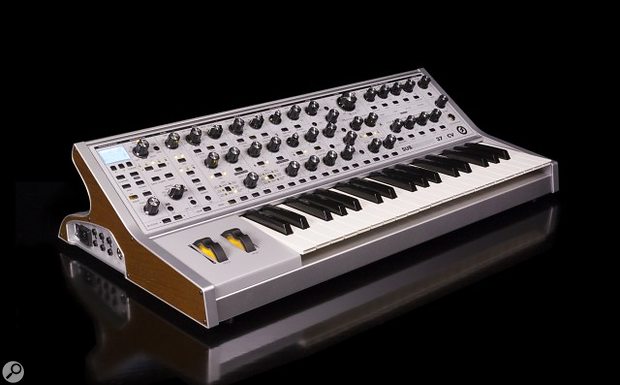 Moog Music Inc. have today announced the upcoming release of a limited-edition redesign of the superb Sub 37 Tribute Edition paraphonic analogue synthesizer. The main difference between the Subsequent 37 CV apart from its older sibling is the addition of four assignable CV outputs and two assignable Gate outputs for interconnectivity with large-format and Eurorack modular systems.

According to Moog’s Cheif Engineer Cyril Lance, the new features were added in response to community feedback "Adding CV interconnectivity was the starting point, but we have also increased the headroom in the mixer and significantly extended the range of Multidrive."

The Multidrive — the Sub 37’s main distortion circuit — has been retuned giving even more capacity for sonic destruction. The doubled headroom also means that the duophonic mode sounds better, say Moog. Meanwhile, the gain-staging of the Ladder filter has also been reshaped to boost harmonic saturation and analogue compression.

It also has an updated keybed for “improved playability” say Moog and a high-powered headphone amp. That’s not to mention that impressive new look, bookended by a pair of solid aluminum side pieces inset with North American hardwood and joined to a rugged steel and aluminum enclosure.

Only 2000 Subsequent 37 CV synths will be made worldwide, and the first 125 will be available for purchase exclusively from GuitarCentre.com and at the Moog Pop-Up Factory during Moogfest 2017, May 18-21. They will each cost $1799 before sales tax.