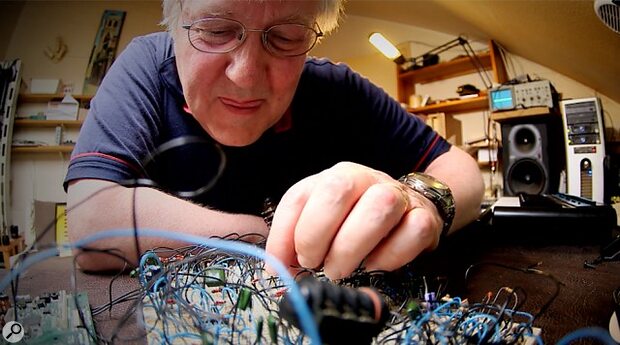 It is with great sadness that we report that Chris Huggett, Britain's greatest synth designer of the EDP Wasp and Gnat, OSCar, Novation BassStation and SuperNova, has lost a two-year battle with cancer and passed away on 22 October 2020 in Headington, the suburb of Oxford he had made his UK home for 40 years.

Chris originally hailed from the North East but moved to Oxford originally to work as a service engineer for Ferrograph's 3M multitrack tape machines and it was in this capacity that he made a service call to Red Gables in Stonesfield, Oxford in 1977 to provide a regular maintenance check on the multitrack in electronic composer Adrian Wagner's Electronic Dream Plant studio.

Adrian had been recording synth-based albums there for several years for the Charisma label but had been toying with the idea of producing a low-cost synth to make synthesis more widely available.

Adrian mentioned this to Chris, who had been looking to move from service to design, and very quickly Chris understood that the new MOS-FET technologies he had been reading up on could be used to realise Adrian's dream of an 'everyman synth'. Chris worked evenings and weekends to design what became known as the Wasp while Adrian set up a limited company called Electronic Dream Plant (of which Chris was also a director) to manufacture and market the black and yellow plastic-cased synth, which also housed a built-in speaker in case an impoverished owner didn't have an amp or headphones to listen to it with. 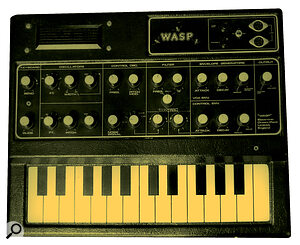 EDP Wasp synthesizer.The Wasp was one of the very first synths (along with early PPG designs by Wolfgang Palm) to have digital oscillators for absolute tuning stability but most owners refer to it as an analogue synth because of the warmth and power of its filters. Rod Argent's Keyboards, the leading UK retailer of synths at the time, took it on straight away and had immediate success, expanding their operation into distribution and sold thousands in the first couple of years. Keyboard players like Dave Greenfield of The Stranglers used its capacitance-sensitive keyboard (with no moving parts) to play very fast arpeggios that impressed the ear far more than the case impressed the eye. Dave Stewart of The Eurythmics even mic'd up the speaker for transistor radio bandwidth sounds.

Unfortunately, Adrian's desire to hit the £199 price point meant that there was not enough profit in each unit sold and reliability issues dampened Argent's enthusiasm. By 1980, the company was in financial difficulties despite the healthy sales and had to be wound up leaving Adrian and Chris with huge debts. Chris declined to be a director of Electronic Dream Plant (Oxford) Ltd but licensed them to manufacture his new design, the even more economically priced Gnat, a single oscillator version of the Wasp with an innovative preset Pulse Width Modulation waveform (called Enhance) to make it sound fat and beefy in the bass end. They also continued manufacture of the Wasp and the Spider 256-step digital sequencer (designed by Stephen Evans of Oxford University).

When Oxford languages graduate (and SOS contributor) Paul Wiffen was hired to launch the Gnat at the February 1981 Frankfurt Musikmesse (Adrian saw international distribution as the way forward), he soon realised that the instruments had not been designed by anyone currently working for the company and asked Adrian's wife Kathy who had done the designs. She told him that Chris was now working as a washing machine tester in nearby Banbury and agreed to introduce him to Paul at a Wasp & Gnat demo he was doing at the legendary Oxford Union debating society.

Chris and Paul hit it off immediately and began to trade ideas for a more professional implementation of Chris' trademark innovations. As the fortunes of the second company began to fail (there was still insufficient profit in each unit sold), they resolved to set up a new company to manufacture and distribute a £599 price point synth with a real keyboard, a built-in sequencer/arpeggiator, additive synthesis of custom waveforms and the ability to split the two oscillators for duophonic performance.

Chris' parents put up the money to start the company and the name Oxford Synthesiser Company was adopted to boost the credibility and profile. During the design phase, they referred to it as the 'OSC model A' but this soon became OSCar. 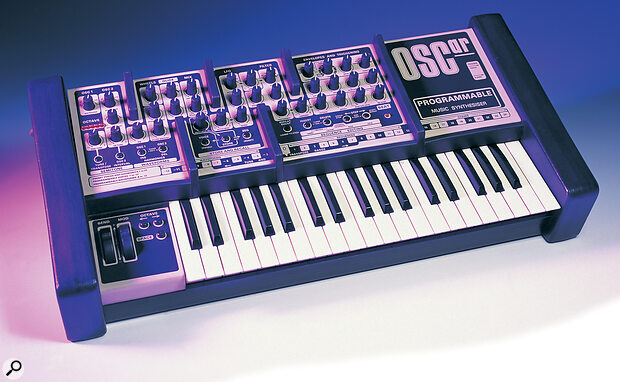 By the end of 1981, the second EDP company was in receivership leaving Paul unpaid but he found work with Elka voicing and demoing the Synthex until the OSCar was ready to launch at the 1983 Frankfurt show, where it picked up French distribution and PPG agreed to distribute it in Germany. Paul would hitchhike from London to Chris' flat in Headington to voice the workbench prototype. By the time it shipped in April, Paul was working part-time at Argent's in London, who then agreed to give Chris' designs another try.

The OSCar quickly found its way into the hands of Ultravox, who bought three (preset one had been modelled on Billy Currie's ARP Odyssey through a distortion pedal lead sound using the overdriven filter feature), and Geoff Downes bought one in time for the third Asia album. 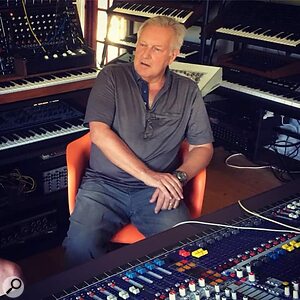 Chris during his time at Novation.Photo: courtesy of Novation'Love's Great Adventure' (featuring that lead sound and a digital waveform sequence between verse and chorus) charted and Ultravox used the OSCar on several Top Of The Pops appearances replacing both Odyssey and Minimoog; the word spread like wildfire that there was a new British synth in town and sales rocketed. Geoff Downes used it in an Asia video and live concert on MTV and PPG's US distributor Europa Technologies ordered 200.

Stevie Wonder used the synth on his hit single 'Skeletons', Jean-Michel Jarre got Dominique Perrier to play some virtuoso OSCar solos on Revolutions, S-Express used it on Top Of The Pops performing their eponymous hit and sales passed the thousand mark. Vangelis bought serial number 1000 and John Foxx joined his former bandmates in singing the OSCar's praises in Electronics & Music Maker magazine and everything looked rosy.

Hans Zimmer, then based in Fulham, saw a demo at Syco Systems of the polyphonic OSCar rackmount (which included sample playback), dubbed the ASG, and ordered the first one of many pre-sold at the 1986 Frankfurt Musikmesse shortly afterwards.

However Europa Technologies went bust leaving their huge order unpaid, the investment needed to put the ASG into production fell through and Chris' parents were forced to wind the company up just as the sales of OSCars passed the 2,000 mark.

By now Paul was developing sounds for demoing the Akai S900 at the British Music Fair and Chicago NAMM. Dave Caulfield of Akai asked him if he could write operating systems as well. Paul put him in touch with Chris, who had been unsure what to do next, and for the ensuing decade Chris wrote the code that ran on Dave Cockerell's and Tim Orr's S1000-series sampler hardware (they had both previously worked for the other British synth manufacturer, EMS).

Properly reimbursed by the Japanese, Chris flourished, bought a house, got married to Melanie who he met skating at Oxford Ice Rink (Paul played the organ at their wedding) and they had three beautiful daughters.

In the 1990s a new British keyboard company, Novation, emerged and Chris designed the BassStation (the best features of the OSCar in a 1U rack) for them and all its many derivatives. His work for Novation culminated in the glorious SuperNova.

The 2,000 OSCars sold now change hands for over $5000 on eBay and its sound is lovingly recreated by G-Force's impOSCar virual plugin on which both Chris and Paul were consultants. Dave Spiers of G-Force was one of Chris' best friends as a result and he has posted pics of the original Wasp team on his Facebook page when they were reunited recently for a synth documentary he is making. This will be the first time Chris' own voice will be heard by the world.

Chris was an intensely private person, modest to a fault, shunning the spotlight and any personal publicity but Novation eventually persuaded him to take a virtual bow on their website. Before that the only published photo of Chris was with his Wasp and OSC designs in an article on European synths Paul wrote for American Keyboard magazine which ended up in Mark Vail's Vintage Synths book. 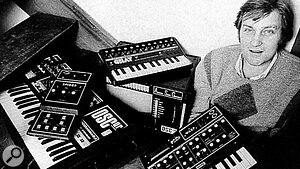 Chris with OSCar, EDP Wasp and Gnat synths.Photo: Original: Matthew VosburghChris enjoyed playing guitar (he and Paul would duet on transcribed Bach preludes when OSCar design work was over for the day), skating (he and Melanie cut a real dash on the ice for decades) and enjoyed a pint and a cigarette till closing time, whilst discussing the latest design ideas he had come up with.

His sense of humour was keen and he loved inventing new terms for things. His beloved cats were "furniture squirrels," combing his hair was "reducing follicular entropy" and the eggs he made Paul for breakfast, after he ended up staying overnight as they had worked so late, were "scrambuloids!"

Chris was fiercely proud of his three daughters and their academic achievements in widely varying fields (he was a real polymath so this was not surprising).

In the days following news of his death, many tributes have been posted on social media. Here are but a few:

Morgan Fisher (Mott The Hoople, British Lions): "I went through the entire Akai S‑series with increasing joy and inspiration (I still have my two S‑6000s) and yet I never heard his name till now. So, salutations, respect and thanks Chris Huggett. RIP."

John Bowen (Sequential Circuits): "I am shocked and saddened to read this! Chris was a lovely human being and a genius synth designer. Such a loss!!"

Phill MacDonald (Korg, Novation): "We batted ideas back and forth at Novation... super guy to work with... As a team we won Future Music's 'best synth' two years running against the big guys... Thank you Chris... you were the best... one of the nicest guys I ever worked with. Fab Engineer, and a lovey dude. :-( RIP Chris."

Paul White (Executive Editor, Sound On Sound): "I first met Chris Huggett at Adrian Wagner’s Electronic Dream Plant. Chris had designed the Wasp synth that Adrian was manufacturing and I was being shown around with a view to getting a job there in my pre-magazine days. Chris kindly provided me with a schematic for the Wasp and explained how it worked. As an out-of-the-box design it was brilliant — digital chips being used as analogue amplifiers with 'character‑building' distortion, a pitch-dividing circuit made up of the various gates and other elements going spare on other chips, a phase-locked loop master oscillator and a really fruity filter. I’d never seen anything like it and to this day I’m in awe of what Chris achieved. As it turns out I didn’t take the job offer, which is just as well as the company failed a year or two later, but Chris went on to design other legendary pieces of kit that have already been mentioned. He was a unique talent and will be greatly missed."

Chris is survived by wife Melanie and three daughters.