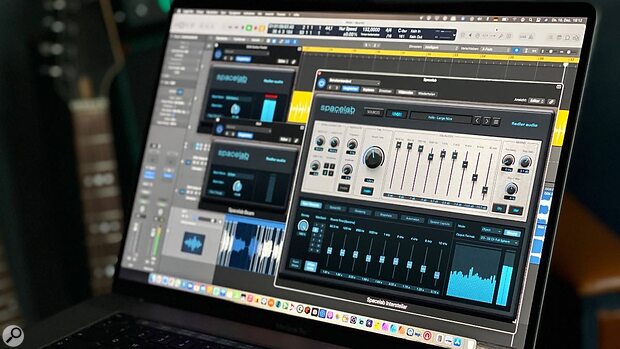 Fiedler Audio have released Spacelab, a new plug-in which combines reverb and 3D-panning, and provides users of any DAW (even those with only stereo routing capabilities) with access to immersive audio mixing tools. The plug-in supports rendering to any desired output format, from stereo through to multi-channel speaker formats such as Dolby Atmos and MPEG-H, as well as providing binaural rendering to create spacial mixes designed for playback on headphones.

Spacelab features an algorithmic reverb which has been developed by Fraunhofer IIS, providing realistic room simulations ranging in size from small boxes through to huge venues and supporting all formats from mono up to full-sphere 3D-audio. Reverb time is separately adjustable on nine frequency bands, and each audio object has its own independent early reflection pattern depending on its position within the space. A ‘Classic’ mode enables the reverb to be used as a traditional send/return effect, whilst ‘Object’ mode enables the object-based mixing functionality. A 3D-panner allows objects to be positioned around the listener in a virtual room, and Spacelab allows users to move objects around within the interface with their mouse and have the results recorded as automation.

The feature that will attract many people to Spacelab is provided via the inclusion of Spacelab Beam, which the manufacturer refers to as a ‘transporter plug-in’. This can be placed as an insert on any track within the user’s DAW, resulting in that track then being shown as an object source within the main Spacelab plug-in. This means that even users of DAWs that are limited to stereo operation are able to utilise the immersive audio functions.

The plug-in is available in two iterations, Spacelab Ignition and Spacelab Interstellar. Ignition offers a reduced set of features and supports up to 24 independent objects, which Fiedler say will be the perfect tool for music producers and content creators that want to be able to position sounds in space outside of the stereo field. Interstellar is kitted out with a more comprehensive set of functions, supporting up to 256 independent audio objects, as well as including additional tools such as a spectral EQ to shape the reverb, and a ‘spread in space’ feature allowing users to define the size of objects within the virtual space.

Spacelab is available in VST3, AU and AAX formats, on systems running macOS 10.12 through 12, and Windows 7 through 11. On Apple machines with M1 processors, the plug-in currently runs via Rosetta, with native support planned for a future update.