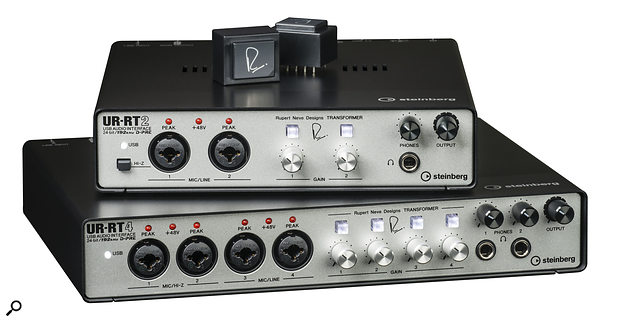 Steinberg’s latest pair of audio interfaces — the UR-RT2 and UR-RT4 — are the result of a collaboration between Steinberg, Yamaha and Rupert Neve Designs.

The UR-RT2 comes with two analogue XLR/TRS combo inputs (with a Hi-Z switch on input 1 for electric guitar), plus 2 TRS line inputs, and a headphones jack with independent level control. Meanwhile, the UR-RT4 boasts four analogue XLR/TRS combo inputs (Mic/Hi-Z on input 1/2 and Mic/Line on input 3/4), plus two TRS line inputs for a total of six inputs, as well as two separate headphone buses with individual outputs.

Both interfaces offer +48V phantom power, USB 2.0 and MIDI connectivity alongside a range of I/O options for laptop and iPad, as well as providing DSP-powered effects for zero-latency monitoring. Together with the D-PRE preamps by Yamaha and the featured Rupert Neve Designs transformers, the UR-RT interfaces deliver an "expressive sound with rich harmonics” say Steinberg.

The UR-RT2 and UR-RT4 audio interfaces will come bundled with Cubase AI DAW software for Mac and PC (64-bit only) and the Cubasis LE DAW app for iPad. The interfaces will be available from the beginning of June and will cost €399 and €649 respectively.

This video from Steinberg goes into the design process of the UR-RT series: