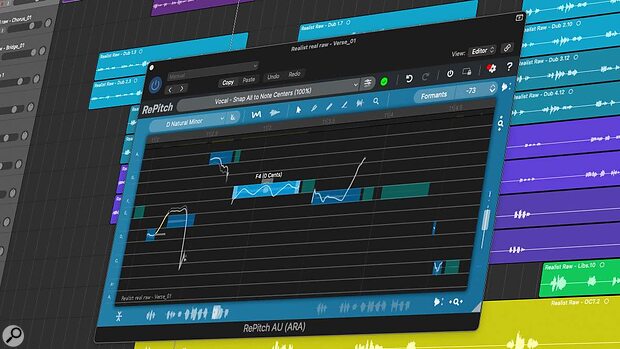 Synchro Arts have released a free update for RePitch, equipping the vocal pitch editing software with a range of new features, fixes, and improvements. The plug-in's SynchroLink functionality has also been enhanced, leading to increased editing capabilities and performance improvements when using RePitch alongside the company’s VocAlign Ultra plug-in.

Version 1.1 of the plug-in sees the addition of a new Pitch Drift control, which provides a way to quickly adjust pitch fluctuations occurring over the length of a note. Pro Tools users now benefit from a SynchroLink connection between RePitch and VocAlign Ultra, which aims to reduce editing time when working on layered vocal tracks by allowing edits made in RePitch to be instantly mirrored to double tracks.

Some additional functionality has also been introduced with the update, with the plug-in now able to process in stereo as well as mono, and it will also continue to update itself whilst not being displayed. A variety of fixes have also been implemented, with keyboard shortcuts now working correctly in all major DAWs, whilst an issue with SynchoLink connections that could cause VocAlign Ultra to delete processes in RePitch has also been resolved.

Take a look at the video below for a demonstration of the new SynchroLink functionality.

RePitch 1.1 is supported on PCs running Windows 10, and Macs running macOS X 10.11.6 or higher. VST3, AU, and AAX formats are available, and there is also ARA2 integration for compatible DAWs. Logic Pro users will need to be running version 10.7.3 or later in Rosetta mode.

RePitch 1.1 is available now, and is a free download for existing RePitch Users. Synchro Arts are currently offering new licences at a 50% discount ($99£70 excluding VAT instead of $198£139 excluding VAT) for the duration of their Winter Sale, which ends on 3 January 2023.