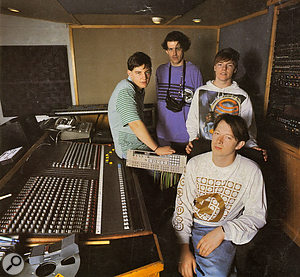 To celebrate, SSR will be holding a party and launch night of a month-long photo exhibition in the Manchester building where the company started life in 1984. The building is now occupied by the bar Kosmonaut on Tariff St in Manchester’s Northern Quarter.

Many iconic bands and artists visited SSR and Spirit Studios during the 80s and 90s to record and rehearse, including The Smiths, Simply Red, The Stone Roses, 808 State and Happy Mondays. The Stone Roses recorded the demo tape that secured their first record deal at SSR, which will form part of the photo exhibition.

The exhibition, '30 Years of Spirit', documents SSR’s history and connection to the Manchester music scene through the display of photographs and memorabilia. Alongside rare and unseen photographs, The Stone Roses’ demo tape and a selection of records produced at Spirit will be on display.

Throughout their 30 years of providing education for the creative industries, SSR has produced an extensive list of alumni who have gone on to forge successful careers in the industry. SSR graduates have worked with a wide range of high profile artists including The Rolling Stones, U2, Madonna, Radiohead, Snoop Dogg, Elbow, Lisa Stansfield, Mr Scruff, Massive Attack, Peter Hook, Sepultura, George Michael and many more.

The renowned Blueprint Studios in Manchester (Elbow, Dizzee Rascal etc.) was started by SSR students using the business plan created as part of their course.

Graham Massey was a student on one of SSR’s first ever courses and went on to form acid house pioneers 808 State, who also recorded several tracks at Spirit Studios including the seminal Pacific State. Read more about the making of the album in this month’s Classic Tracks feature in SOS.

In 2009 SSR began a period of expansion, with a growing demand for its highly regarded training seeing the company open new campuses in London and Jakarta, Indonesia. SSR Singapore is due to open imminently and the organisation has further international campuses in development. The companies’ successes are a great success story for Manchester business and the region’s

creative industries as a whole.

SSR is planning to celebrate its birthday with a range of events throughout 2014 including high profile guest lectures, field trips and other special events.

The photo and memorabilia exhibition will run throughout April at Kosmonaut on Tariff St. Entry is free.