From A To C

Derik Lee laments that the “big scoring stages in which you could put everyone, singers and an orchestra, in the same room are disappearing” in New York. To address this, Avatar offers the facility to tie two rooms together and spread larger companies between them. However, for the recordings of Hamilton, both Studio A and Studio C were large enough by themselves. The recording space of Studio A is a whopping 230 square metres, enough to hold 65 people, and Lee was only dealing with 11 in total on the last day of recording there: band, string quartet and harp. Both the capacity to screen off the drums and percussion, as well as the Neve 8088 desk in the control room, were essential features. 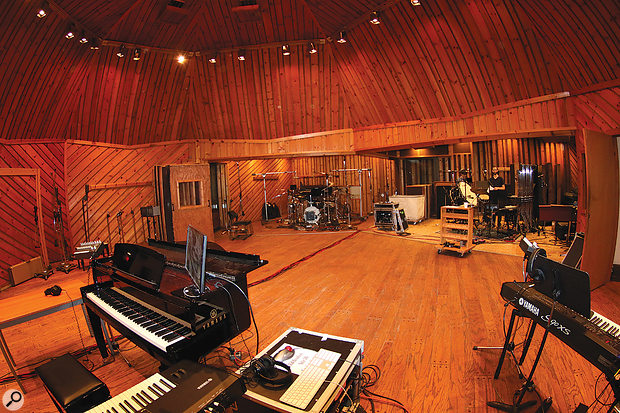 The famous live room at Avatar Studio A, as set up for the band recordings.

“We had the luxury of using that awesome Neve, and all the mics on the band went through that. The drummer and percussionist also had Roland SDP pads, the bassist a keyboard bass, and the guitarist was playing through a Fractal Audio unit (though Tim also wanted me to record the guitar DI in case he wanted to adjust his sound), and there were two keyboards with four outputs each. For all of these line outs I used the studio’s gear, including GMLs and Millennias. My mics were a Sennheiser MD421 on the kick, and a Neumann KM84 on the snare top and a Sennheiser MD441 on the snare bottom, though Andreas used five snares in total! I had a Shure SM57s on the other snares, and an LCR overhead, consisting of two Neumann U67s and a centre Neumann TLM170, so no matter where he played, the snare could always be panned where Tim wanted it. 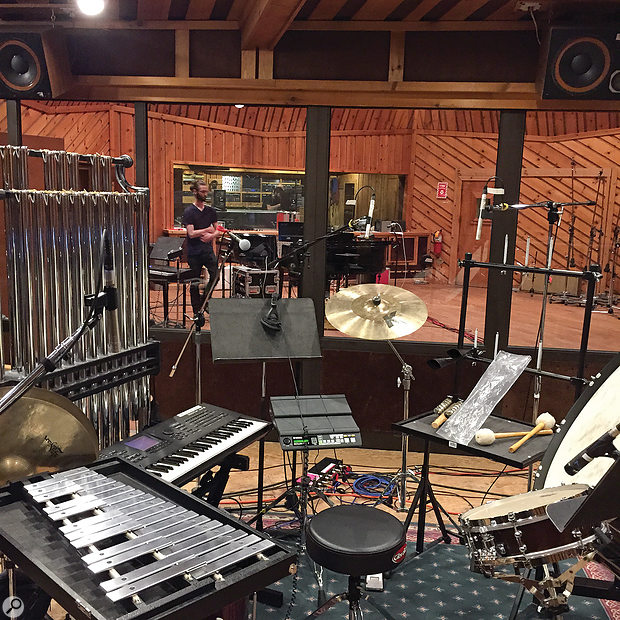 The work of percussionist Benny Reiner is central to the show’s music. 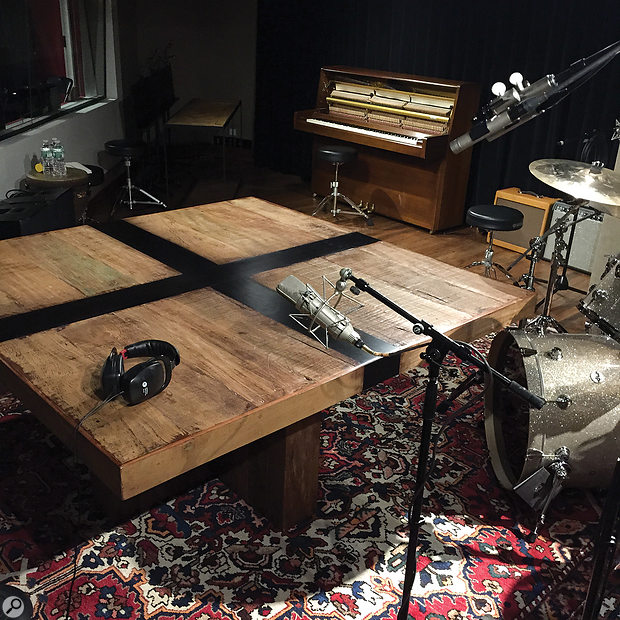 Not a misprint: ?uestlove really did perform a percussion overdub on a table!

The electric bass went direct via an Avalon U5 and an LA-2A, and the upright bass had a DI, plus I also recorded the latter with a Neumann U47. The acoustic guitar and banjo were recorded with an AKG C414, and went through a UREI 1176. The strings were recorded with a Schoeps CMC5 on each of the violins, a Neumann KM84 on the viola, and a Neumann FET 47 on the ‘cello, plus two AKG C24s as room mics. These were the only room mics I used. The harp went down via two Neumann KM84 mics. Everyone used the studio’s Nemesis eight-channel headphone monitoring system. 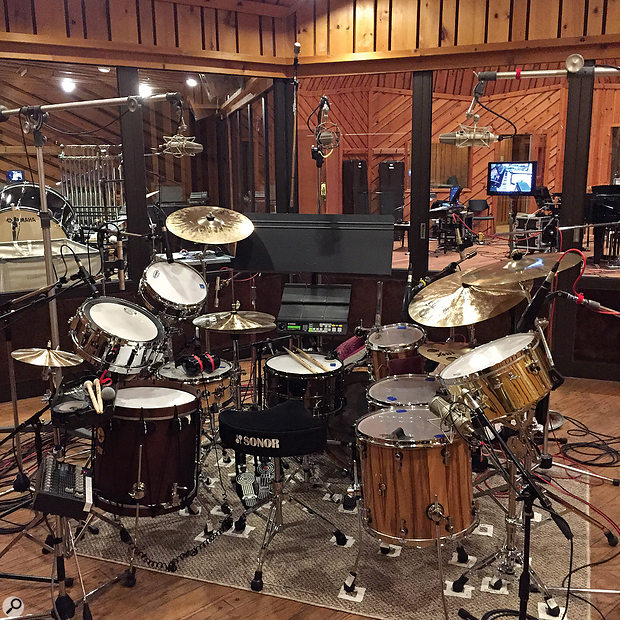 The pace of the recording sessions meant that Derik Lee had to stick to a single drum-miking scheme for all the songs. Note the three overhead mics in LCR configuration.

“Moving to another room for the vocal recordings was a bit of a challenge for me. In order to keep things streamlined, I did a submix in Pro Tools of the band recordings to stereo, which helped us move more quickly when we recorded the vocals. Avatar Studio C has a Neve VR desk, and I again used that on all microphones, I didn’t even think twice. All principal vocals also went through a hardware compressor, either an LA-2A or 1176. I used mainly Neumann U67 mics on the principal singers, and Avatar’s custom-built A67. There was one U47, which I used on Daveed Diggs [Marquis de Lafayette/Thomas Jefferson], because his voices sounded rather harsh on a 67. I like to record vocals with the 47, but singers sometimes swapped places during the sessions, if they wanted to be in a sightline with another singer, and I wanted to give Tim a consistent sound on each singer, so it was easier to have all 67s.

“As I mentioned earlier, each of the ensemble players also had his or her individual mic, a combination of Neumann 87s and 170s — we only used tube mics on the principals. I recorded the ensemble vocalists without a hardware compressor, but did use a post-record software compressor, the Waves RCompressor, because some of them were not that well versed in microphone technique. The principal singers were for the most part used to working in a studio, so they knocked out their parts, but some of the ensemble players were new to working in a studio and weren’t sure what to listen to or how to approach the mic. We had to simply give them a band mix and then ask them to take one headphone ear off if it was too loud. We simply did not have the time to create a monitoring balance for each individual ensemble singer. As long as they could hear the drums for timing and something melodically to get their pitch from, it’s what they had to work with. The RCompressor helped me to control the ensemble vocals for monitoring.” 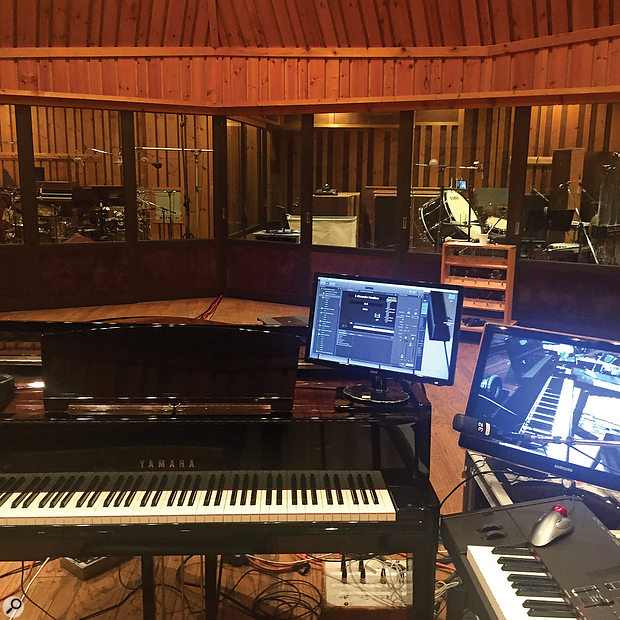 Arranger, musical director and keyboard player Alex Lacamoire also conducted the band from the piano. The musicians were used to seeing him over a video link in the pit, so the same system was employed at Avatar, meaning that players could be positioned optimally for sound without needing to worry about sight lines.

While Derik Lee gave it his best shot recording the entire cast at Avatar, Tim Latham was doing long hours fitting it all together. Unusually, his first step was to mix all the band tracks without vocals, which were added later. This to some degree echoes what he calls his “first gig”, in a major studio in New York in 1989, when he helped engineer karaoke tracks, for which some of American’s top engineers and musicians were busy recreating some of the biggest hits of the day. “I learnt more in those four months than at any stage in my career,” recalled Latham. His earlier experiences didn’t make the process of mixing just the band and adding the vocals later all smooth sailing, however.

“I first have to say that I am someone who mixes songs, in the sense that all choices and decisions I make, both technically and artistically, are guided and informed by the lyrics. My role is to present a final mix that represents the story and emotions of the song, with the mix itself being absolutely transparent and free of gimmicks and gratuitous use of effects. Because I am so focused on the lyrics, it was initially quite a challenge to mix just the band first. After I had done that I added the strings and the harp, and the vocals after that, usually first the ensemble vocals. I learned while mixing those first core songs how much room I actually had to leave for the vocals!

“My first couple of mixes were pretty unsuccessful, because I hadn’t anticipated how much space 18 or 20 tracks of vocals were going to take. What worked in my favour were the arrangements. Lin and Alex had gone for six years making sure every note in those arrangements was right and that there were no conflicts, no things getting in the way of each other. But I still had to go back a number of times and redo some of the instrumental and vocal balances. One important balance, which we checked during these listening sessions, was how far the vocals floated over the music. With most cast recordings it’ll be like 70 percent vocals and 30 percent instruments. In this case we wanted something like a 55-45 balance. That still meant that the vocals took up a lot of space, because there are tons of vocals, and the vocal writing itself is incredibly dense, with all the fast rapping, and things being non-stop. But as Lin explained, this reflected exactly what Alexander Hamilton was like in person.

“The other crucial aspect of these mixes was the dynamics, which tend to be very important in musicals. I have done other cast recordings, and also in this case I basically work a little bit backwards. I get the overall sounds together and the relative balances of what I call the motor. This is the rhythm section, which I wanted to be really hot and tight and together. I make sure that the mix hits the mix bus at maximum volume where it needs to, but also preserve the super-wide dynamic range. Part of the reason why the Hamilton recording works so well is that we managed to preserve that. So when it’s huge, it’s really big and when it’s quiet, it’s very quiet. So I really had to make sure during mixing that there was enough headroom for the biggest moments. From the beginning of my mixes I would reduce the volumes of the eight subgroups of everything, rather than individual tracks, because I don’t want to affect the overall compression rates. This is one of the reasons why I have aux subgroups, which in this session are Ableton material, the drum kit, percussion, harp, strings, lead vocals, female ensemble, male ensemble. Of course these subgroups also allow me to adjust and automate these groups as a whole. Incidentally, the Ableton material usually consisted of non-musical ingredients, like gunshots, record scratches, and other sound effects, that had been prepared — they’re being used live — and that we dropped into the sessions after the recordings.”