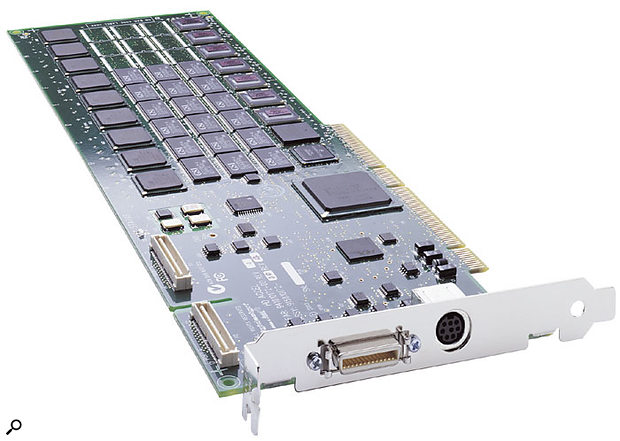 HD Accel is the latest processor card for Pro Tools HD TDM systems. We investigate, and try to clear up some of the confusion surrounding the release.

As you'll probably have seen in SOS's News pages, Digidesign have released their latest DSP card, with the traditional promise of doubled mixing/plug-in capacity per card. With the DSP power doubling 18 months since the appearance of the previous card, I'm supposed to mention Moore's Law at this point — but I won't. Rather than a being completely new system, the HD Accel PCI cards are designed to slot into Digidesign's top-of-the-range Pro Tools HD system. The 'master' HD Core card is unchanged, so the basic single-card HD system is the same as it was before. However, on new systems, additional cards will now be Accels instead of the original HD Process cards.

In addition to the extra plug-in power, HD rigs with these new cards will benefit from 50 percent higher voice counts, meaning a new maximum of 192 audio tracks at 44.1 or 48 kHz. If you've already got an HD system but have no spare slots (or you just want the maximum possible DSP) there's a reduced-cost exchange program for swapping out original Process boards. As usual there's an extra concession if you bought into HD recently (since July 20th).

So that's the basics, but existing HD owners seem a little confused and uncertain about what to make of Accel. Let's look a little deeper at the new technology, and the practical matters such as plug-ins, compatibility, and whether to exchange Process cards.

The Pro Tools LE 6.1.1 update includes new OS X Core Audio and Windows ASIO drivers. Alternatively, these drivers are now available via stand-alone installers. The purpose of these is to enable non-Digi audio packages like Logic and Cubase SX to work with Digidesign audio interfaces including the 002 and 002R.

The Mac drivers come with a setup application for selecting which of your audio programs will use the driver. Both the ASIO and Core Audio drivers are single-client, meaning only one program at a time has access to your Digi box's I/O. These days this is not so much of a problem, as you can probably route peripheral software into your main audio application via Rewire, or run virtual instruments as plug-ins. Otherwise it's possible to run additional software via the computer's built-in audio system, or even another (non-Digi) interface.

First the technical bit (bear with me, because this should make what follows clearer). Accel cards sport seven audio processors that run at a little more than twice the speed of the DSPs on HD Core and Process cards. Four of the new chips have access to a generous amount of on-card RAM. Alongside the seven faster chips, the cards have a further two processors identical to those found on the original HD cards. These two older chips are intended to share the work of audio recording and playback, and also provide compatibility with plug-ins that have not been updated to run on the new chips. Here's where a whole bunch of confusion has arisen. Due to an unexpected technical 'banana skin' it turned out that existing HD plug-ins didn't work on these two 'compatibility' chips! A simple fix is required for plug-ins to work (the code just has to be recompiled based on the new Digi Software Developers' Kit). Ideally, existing plug-ins will be updated so that they work on the new chips (and are optimised for extra instances) as well as the old ones. In fact, all Digi's own plug-ins — and those co-developed by them — are already at this stage. 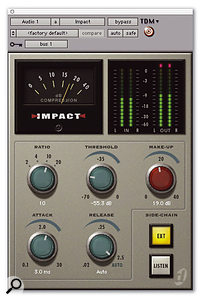 Digidesign's Impact mix-buss compressor is the first plug-in to take advantage of Accel's faster DSP chips.What's confused people is that most independent developers will probably do a two-stage update: a quick one that supports the older chips, and then a complete optimised reworking to support all chips. So the thing to be aware of is that a plug-in that has been updated for Accel may actually just be compatible with the two older chips. Those thinking about replacing Process cards (rather than simply installing additional Accel cards) might actually see a drop in DSP resources until their plug-ins are fully updated. This should be taken into account if you have a non-updated plug-in that you tend to use many times in each mix. Digidesign's on-line third-party software catalogue holds up-to-date info on individual plug-in support, and you should refer to this to help make the decision whether to defer a hardware upgrade.

Pro Tools veterans may start to hear another alarm bell following some of what they've just read, and several concerns have indeed been voiced, most publicly on Digi's User Conference message board. People who've experienced Mix TDM systems will remember possible problems associated with the combination of different DSP processors, and amounts of processing memory. In certain circumstances, when you had a packed mixer with some plug-ins that could run on any type of chip alongside other plug-ins that needed a specific chip, it was possible that Pro Tools would allocate its DSPs poorly when reopening the session. The result could be that your session was unable to reload all the plug-ins you were originally using. HD Core and original Process cards have just one DSP chip type, configured the same way across the board, so this can't happen. With Accel, the worry is that this type of 'DSP shuffling' scenario might return. Digidesign have responded to concern about this issue by saying that Pro Tools's built-in DSP manager is now much smarter and can foresee problems and prevent them from occurring.

We already mentioned a couple of months ago that some older PCI cards are not compatible with the architecture of Apple's latest desktop machines. The latest news is that all versions of Pro Tools will need a free software update for full compatibility with G5s.

Following traditional Digi testing and update procedures, these patches will be rolled out in several phases. Phase one has just been completed as I write, and the v6.2r2 update on Digi's web site covers HD and Accel support for single-processor G5s. LE systems are expected to get their updates in November, and will then be good for all G5s; HD/Accel will gain dual-processor compatibility at around the same time. Bringing up the rear will be Mix systems, which will be updated at some time around the end of the year.

For years the challenge for manufacturers of DSP cards has been to keep their systems significantly ahead of contemporary host-based systems. We're at the point now where a huge amount can be achieved with an unaided off-the-shelf computer, and Digi are clearly aware of this given their broad expansion into the host market. Accel-boosted systems are certainly going to enable larger mixes and more plug-ins, meaning that high-end Pro Tools-based music and film mixing rooms are going to be very tempted. The real story here, though, seems to be a shift in emphasis. A fully stocked HD — or even Mix — system can already handle a large majority of recording and mixing jobs, so with Accel it looks like Digi will likely be shooting for quality as much quantity.

Expect to see new plug-ins emerging that can do things previously only viable in expensive outboard gear, and doing them at very high sample rates and in surround. With the right third-party development, the Accel era could see the kings of the pro mixing environment, such as TC and Lexicon units, start coming under the same pressure as hardware samplers and synths. 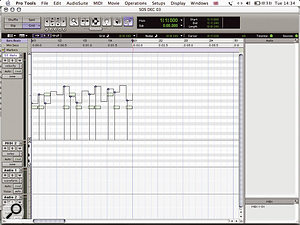 The pencil tool can be used in Random mode to introduce variation in MIDI note velocities.PT6.1.1 includes a new feature where the Edit and Mix windows scroll to display the same tracks when required. Clicking on a track's name box in the Edit window will update the Mix window. Conversely, Control-clicking (Mac)/Start-clicking (Windows) on a track's name in the Mix window will update the Edit window.

When drawing in MIDI notes with the pencil tool, for example when creating drum patterns, you can set the default velocity from the MIDI page of the Preferences. After you've added your notes, try flipping to velocity view, switching the pencil tool into Random mode, and drawing across the notes to introduce some variation (see screen shot). The amount you move the pencil up or down sets the range of the random velocity fluctuations.

For any MIDI tracks that contain the cursor or a selection, you can toggle swiftly between Notes and Regions views by hitting the minus key (on the main keyboard, not the keypad).

When working with a loop, you normally have the loop duration dragged out in the Edit Window's time ruler, and the small 'Link Edit and Timeline' icon (see screen shot) de-selected. This stops any selections or clicks you make in tracks from updating the 'playhead'. However, one thing to watch out for is that hitting 'Return to Zero' (Return key) places the play position at the beginning of the song and removes the selected loop time.

If your Pro Tools AV system keeps refusing to record video into the timeline (ie. if it just stops), this often means you need to switch the 'Open Ended Record Allocation' Preference to a limited maximum record time.