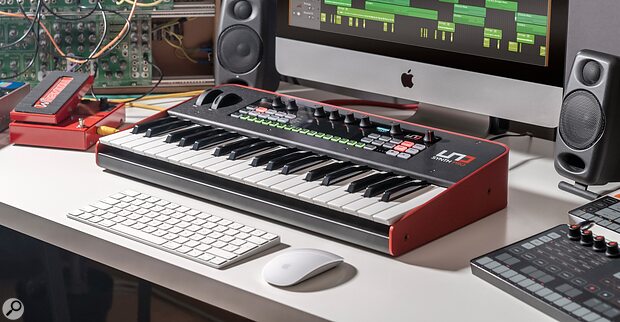 IK Multimedia have just added two new instruments to their Uno range of synthesizers. The Uno Synth Pro and Uno Synth Pro Desktop mark a big step up from the original battery-powered Uno (and its dinky percussion stablemate, the Uno Drum), and while some portability has been lost, much has been gained along the way.

So, while the Synth Pro and Synth Pro Desktop lose battery operation, their synth engines have been vastly improved, with a second filter and ADSR envelope, an extra oscillator, an extra LFO, more effects, and paraphony.

The new filter is a high-pass design that can be routed in series or parallel with the existing one, and it can operate in either 2- or 4-pole modes, yielding a total of 24 different filter combinations. The extra envelope, meanwhile, means that amplitude and filter behaviours can be adjusted independently — or you can assign them to any other destination in the 16-slot matrix, which includes parameters like LFO speed, oscillator pitch and wave shape.

Among the new effects are reverb, delay and modulation treatments, which you can also apply to external sources via the audio input jack.

Also improved is the sequencer, which has 64 steps to the original Uno's 16, and which you can integrate with modular kit courtesy of the CV I/O round the back. A 10-mode arpeggiator has also been added, and there's even a chord mode, allowing you to take full advantage of the paraphony by tuning the oscillators in triads. 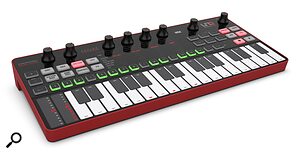 Internally, the two newcomers are identical, their major differences being that the Desktop version uses a similar capacitive keyboard to the original, while the Pro employs a 'proper' 37-note Fatar keybed with mod and pitch wheels.

The new Uno Synth Pro and Uno Synth Pro Desktop are priced at £699.99 and £429.99, respectively, and are set to become available this side of Spring. Click the video below to hear them in action.