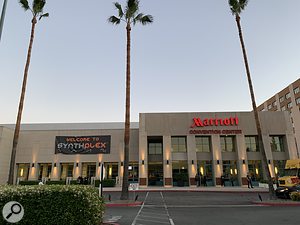 ‘Beautiful downtown Burbank’ really hasn’t changed much since the 1960s. This ironic tagline was in vogue amongst the fake TV announcers and late night TV hosts whose shows were taped in this featureless Los Angelian suburb of movie production studios and low rent apartments for the wannabes trying to break into the entertainment business.  Many of the studios have moved on. Not so the apartments, built on a budget and still smelling of damp and desperation.

Don’t get me wrong. The Marriott Hotel and Conference Center, setting for the inaugural ‘Everything Synthesizer’ Synthplex event, is admirably smart, new and efficient. But the locale, complete with a windblown Fry’s Electronics store that looks like it hasn’t been swept in twenty years, couldn’t have been more appropriate given the show’s juxtaposition of instruments modern, ancient and ‘modern-ancient.’ 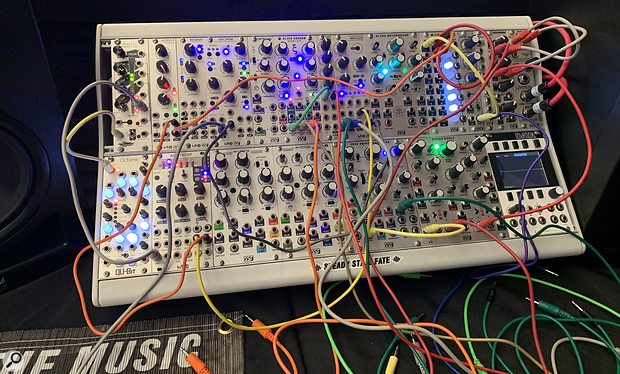 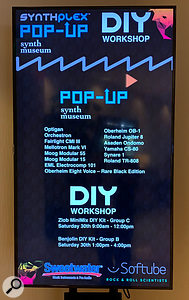 Eurorack (‘modern-ancient’) dominated, but there were plenty of genuine relics from synthesizers’ past. And I’m not even talking about myself. Vintage instrument rental and repair companies, EMEAPP (the Electronic Music Education And Preservation Project) showing a fascinating Moogs-through-the ages exhibit, a pop-up synth museum populated largely by Synthplex co-founder Michael Lehmann Boddicker’s classic instrument collection, plus original and modern re-workings of wonders like the Ondes Martinot and Optigan.

Synthplex was divided between two bustling exhibit halls filled with vendors fluttering and stuttering with every blip and phizzz imaginable, a series of rooms for discussion panels and presentations, and a cavernous live sound stage cloaked in perma-darkness.

With everyone suitably be-synthed it’s tempting to say performances ran the gamut from A to B but there was variation: from the overtly experimental such as Kurt Kurasaki, MadDaddies and Eightch, to performers who added more conventional music skills and controllers like the trumpet-playing Sarah Belle Reid and prodigiously talented keyboardist Lisa Bella Donna, to a cluster of  ‘big names’ like Mark Isham and Vinnie Colaiuta. I felt the peerless Vinnie‘s style somewhat cramped on an electronic kit, to be honest. And unfortunately I missed the likes of Jack Hertz, Robot Nature, The Volt Per Octaves, Sinedrifter, Faraday Cage and Keytar Jeff.  If I’ve not already left it a bit late to revive my own performing career, I’d better hurry or else the moniker Joules Juno will be taken. :-) 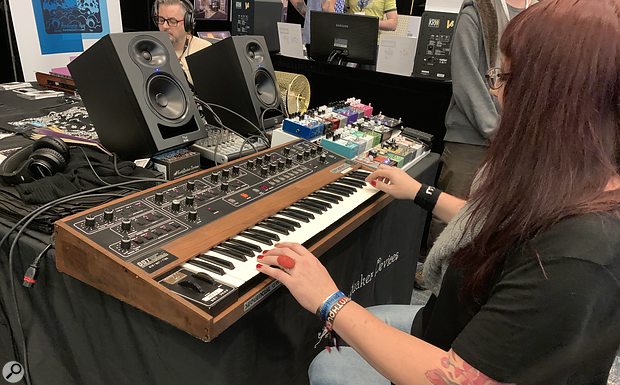 On Friday Thomas Dolby gave a superb presentation in one of the smaller rooms, talking about and demonstrating techniques and tools from his past. Incredibly, there was only a handful of people in attendance; more in ignorance than indifference.  Mind you, he almost missed the presentation itself. Thomas and I chatted over breakfast and I mentioned how much I was looking forward to coming to the talk in a half hour. “What?” he almost choked. Seems like the event time had been moved without his knowledge and off he ran, mid croissant.

On the Saturday night Thomas drew a more expected capacity and adoring crowd for the Sponsored Dinner Banquet (thank you, Roland). But it would have been nice for more of the regular attendees to have been able to see this pioneer synth performer on one of his now rare live performances.  Watching Thomas Dolby play 'Budapest By Blimp' is always a treat and his multimedia presentation of 'Heroes' — with slow-mo footage taken from Live Aid, when he backed up David Bowie — was extremely moving. 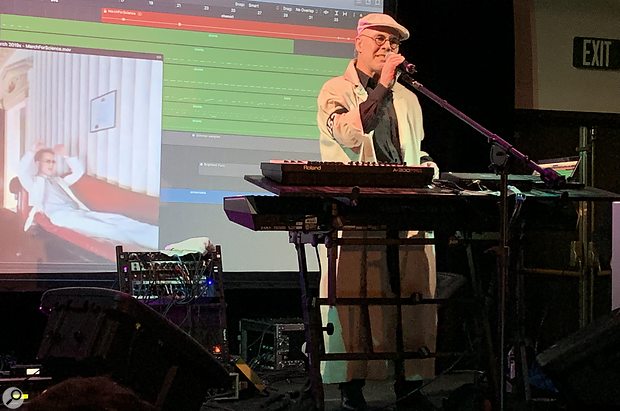 Saturday’s gala evening concluded with BT’s curated talk and performance, the Telephonic One’s upbeat persona just the ticket at the end of an action-packed schedule. BT, along with several others at Synthplex, used early Juno synths. I wonder, is now the time to donate my Juno-60, lovingly be-scrawled by the likes of J. Anderson, R. Wakeman and S. Hackett to one of the synthesizer museums that seem to be popping up like social media-based music sites that generously distribute your music to the world free of charge? Don’t get me started... :-)

Some key discoveries: Loved the look of Arturia’s Microfreak with its Buchla-esque touch keyboard.  Its $299 price point will satisfy one’s curiosity as to what this wavetable-cum-digital oscillator/analog filter can accomplish barely putting a dent in my PayPal balance. I can already see it on my desk. 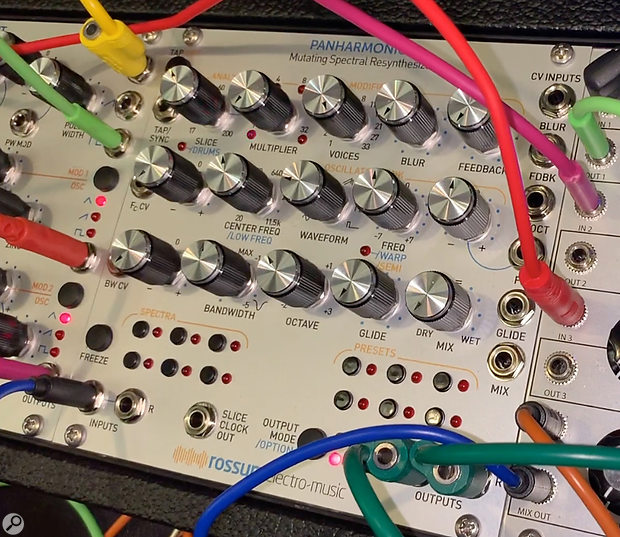 I also liked Rossum-Electro’s Panharmonium and the demonstration by its creator Bob Bliss. I wouldn’t say Eurorack is running out of new ideas but it’s getting harder to find modules whose schtick you can genuinely say you can see a need for. Panharmonium is both fresh and chock full of application possibilities. Essentially it analyses the spectral content of a patched-in audio signal and, in myriad ways, uses the result to drive a bank of up to 33 oscillators. Think Melodyne applied to a monster Eurorack rig!

Speaking of software, it’s hard not to be tempted by Cherry Audio’s Voltage Modular Virtual Synthesizer. If one of Eurorack’s issues is the problem of getting to grips with so many options in terms of controls, types, and technologies, what better way to learn than on a cost-effective software modular where you don’t just have access to modules at, effectively, a buck-a-piece, there’s also a Module Designer on which you can create your own module complete with custom knobs and sliders. Throw in a polyphonic capability, where mono would normally reign on a hardware instrument, and this represents a serious amount of fun for seriously little outlay.

Roland got behind Synthplex big time, so major props for that. They were the perfect company to do so, armed not only with mouthwatering new ‘Boutique’ hardware recreations of TR-808 (TR-08) and SH-01 (SH01A), emulations of all their classic analogue and digital synths and of course the so-named Roland Cloud, including SRX World Synthesizer and the newly added TB-303 (which reminds me, where the heck is my actual TB-303, goddammit?). 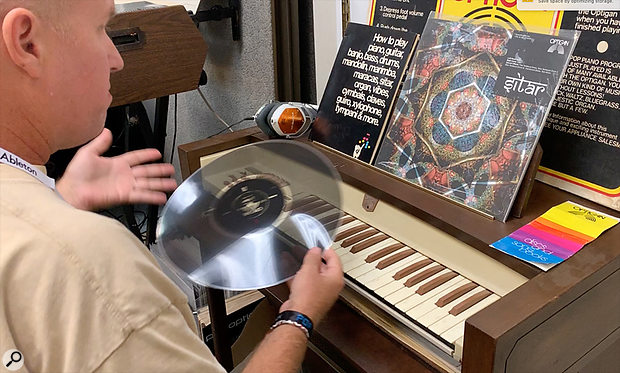 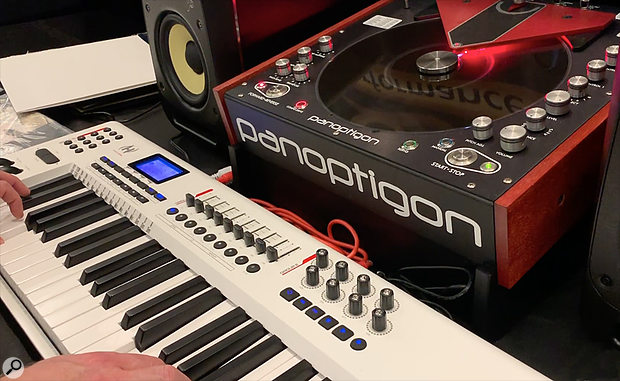 ...and its modern relation, the Panoptigon from Quilter Laboratories. 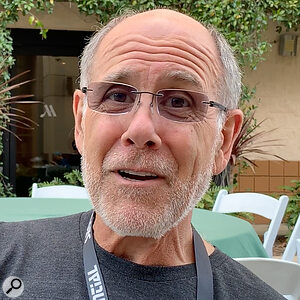 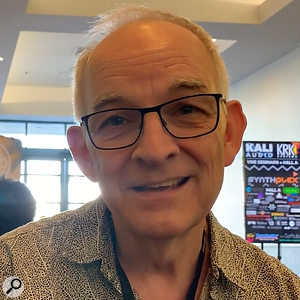 Roger Linn at Synthplex 2019.It was a weird but wonderful experience sauntering through Synthplex’s aisles greeting friends old and new—and I’m talking about both men and machines. The Optigan: hugely cool in either original or new form courtesy of  ‘Panoptigon’  / Quilter Laboratories, Dave Smith now reunited with his Sequential company [read our interview] and continuing to produce relevant instruments like the Prophet XL (8Dio’s ARP 2600 Add-On pack for the Prophet X and Prophet XL is now available for download), Roger Linn and the beautiful LINNstrument, and many others. Plus Chris Meyer, whose weighty Eurorack book Patch & Tweak, written in English with Danish Kim Bjørn, ensures Eurorack has a future beyond those whose ‘natural’ game is a set of patch cords and a deep love of sounds that are unimbued with much in the way of musical value. I jest, of course.

I didn’t avail myself of a module (many items could indeed be purchased, though, unlike at a trade show like NAMM) or specials (attendees could get a free full version of Rob Papen’s Go2 virtual synth) but I did pick up a stylish T-shirt and some cool Steampunk stickers ‘for my kids‘ (ahem).

Synthplex was a blast. The attendance may not have been out of this world, which made it good for the attendees but maybe not quite so much for the organisers? But it was an inspiring mix of men (predominantly, of course, but women are increasingly being recognised in this most boyish of boys-and-their-toys fields) and machines, memories and prescience.

Will I be back next year? Heck yea!