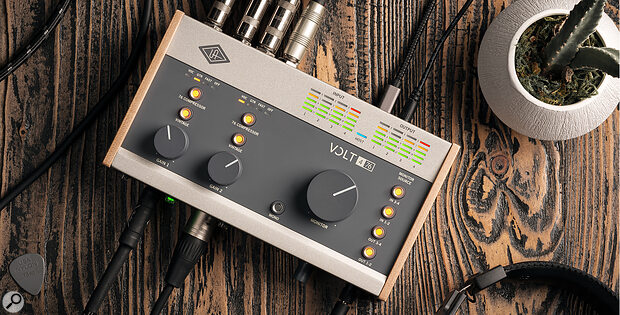 Universal Audio have just announced a brand-new set of affordable desktop USB audio interfaces, called the Volt series. Despite them being priced at the entry level, they nonetheless incorporate many of the features and technology from their flagship devices.

There are five new interfaces in total: the Volt 1, Volt 2, Volt 176, Volt 276 and Volt 476. All those with the '76' appendix feature a built-in 1176-style compressor on their front-panel inputs, allowing you to capture the sound of UREI/UA's classic FET compressor when recording. The '76 compressor offers a choice of three presets, including the self-explanatory Vocal and Guitar modes, plus a Fast mode for more assertive dynamic control.

Common to all the newcomers is UA's proprietary Vintage Mic Preamp mode. At the flick of a switch, users can engage circuitry in the Volt preamps that emulates the company's classic 610 valve console, which UA say adds a “rich, full sound” to vocals and instruments.

Every Volt interface also offers a pair of 5-pin MIDI I/O ports and a headphone out with dedicated level control. They also all feature a basic monitor control plus a zero-latency direct monitoring switch, with the top-of-the-range 476 model adding monitor source selection, mono summing and speaker switching too. All but that model can also be bus-powered, for truly mobile operation.

As you'll see from the comparison table below, the pricing for these new Volt interfaces is very attractive — and UA are hoping to sweeten the deal even further by bundling a suite of recording software with each one. So, every Volt interface will ship with a copy of Ableton's Live Lite DAW, a collection of premium Softube amp and effect models, a set of Plugin Alliance processors (including an Ampeg bass amp modeller and two Brainworx bx-series plug-ins), virtual drummer and bassist instruments from UJAM, Spitfire Audio's LABS series of sampled instruments, the highly regarded Relab LX480 Essentials reverb plug-in, and Celemony's Melodyne Essentials tuning software.

The new Volt series from Universal Audio is due to go on sale from November, and we'll be bringing you an in-depth SOS review very soon...

Check out this video from Produce Like A Pro to see the Volt 276 in action tracking a cover of Peter Gabriel's 'In Your Eyes':