Published 5/10/21
Your one-stop-shop for live and recorded bass? 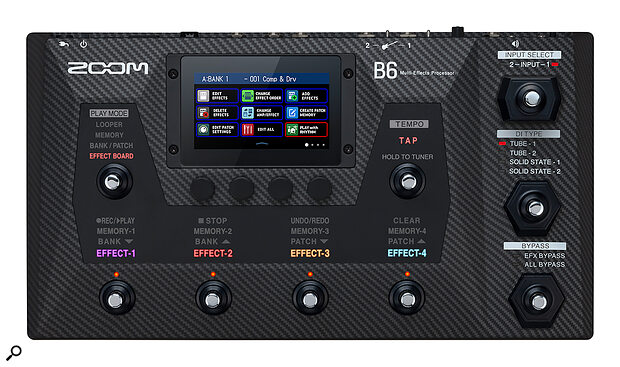 Zoom's latest release is an all-in-one bass processing unit, dubbed the B6. It combines amp modelling, multi-effects processing, an impulse-response loader and more into its pedal-format housing, offering live control via its nine footswitches, plus in-depth tweaking courtesy of a hi-res colour touchscreen and four rotary encoders.

The screen interface is said by Zoom to work intuitively and much like a mobile phone, so you can swipe through presets and use all the familiar touch gestures to select, combine and re-order effects and processors. Zoom also tell us that the digital processing operates at a sample rate of 88.2kHz, which should preserve phase linearity even at the extremes of human hearing.

Unusually for such a device, the B6 provides two inputs, which you can toggle between using the top-right footswitch. Both input jacks can operate at either a 1MΩ or 10MΩ impedance, making them suitable for all kinds of sources, including active and passive bass guitars, and upright bass piezo pickups. Zoom even recommend using the second input for a bass synth, for band members who straddle the line between traditional and electronic instrument line-ups. For bassists without a synth, you'll be able to get pretty darned close with the on-board bass synthesizer and talkbox modules.

The output side of things is unusual too, in that it offers emulations of four “iconic” DI boxes. Zoom don't tell us which models they are exactly, but we do know that two are valve models and the other two are solid-state designs.

If you've been longing to sack your drummer, the B6 might just let you do that too, thanks to its 68 internal rhythm patterns. And if you've had enough of the rest of your band entirely, why not hand them all their P45s and take your solo looping show on the road? The B6's built-in loop recording capacity tops out at two hours (providing you've got a suitable SD card), and up to 256 loops can be layered at once.

Finally, the Zoom B6 can also work as a 2-in/2-out audio interface, making it suitable for all your bass recording needs.

Zoom's B6 is due to go on sale later this year, and is priced at £478.80 including VAT. Check out Zoom's introductory video below to hear it in action!