Secrets Of The Mix Engineers: Todd Hurtt By Paul Tingen

Todd Hurtt says that the expansion of his work on Hall Of Fame to include mixing meant that he “learnt a lot about myself. I’d done some mixes on the previous albums, but had not been credited for them. My work still consisted almost entirely of recording. But as I started mixing, I had to expand my working processes. I have a vocal recording template, and when I mixed ‘Rapstar’ I thought it was a one‑off. But as I mixed more songs, I also created a mix template. Recording and mix templates are very different things!

“I’ve been recording vocals for so long. Vocals are my thing. My vocal recording template is pretty simple, and it also allows me to do a rough mix very quickly. When a client leaves Paramount after a vocal session, they want to have something that they can listen to and that sounds good. I can do R&B with my template, or rap, or pop, heavily effected or vocals with very few effects, and so on. It’s very versatile.

“On the inserts of my vocal record track template I have a Waves SSL G‑EQ, Waves C4 multiband compressor, FabFilter Pro‑Q 3, and a Waves Pultec EQP‑1A to add high end. My aux tracks have the Waves Manny Marroquin Reverb, the Waves Renaissance Reverb, though I have been using the FabFilter Pro‑R recently, Valhalla Vintage Verb, Waves H‑Delay and Waves Doubler. On the master bus I have the Waves SSL E‑Channel Strip, another Pultec EQ and a FabFilter Pro‑L 2.

Essentially, what I’m doing when mixing is trying to beat my rough mix. I’m trying to make it hit a little harder, but also not to over‑embellish things.

“Essentially, what I’m doing when mixing is trying to beat my rough mix. I’m trying to make it hit a little harder, but also not to over‑embellish things. There were a couple of songs on the album for which my mixes got very involved, and Polo just said, ‘It sound different.’ So I had to go back and pull things back a little bit again. He has an ear for what he likes!

“The other thing is that the guest vocals I was sent were also often pre‑mixed, for example those of Nicki Minaj, Lil Wayne, Young Thug, Roddy Ricch. This is why there are co‑mix credits on a few of the songs. And often they came in at the last minute! Many artists are very particular about their vocals, so I can’t touch the vocal production.

“I now do the same thing when I send out Polo’s vocals when he is featured on somebody else’s song. In the past I’d send dry vocals with effects tracks, but he did not like what was done in some case, so I now send them out fully produced. When I mixed in the guest vocals on Polo’s tracks, it was a matter of matching things level‑wise, and then trying to make everybody feel like they’re in the same place, using reverb.”

“During recording and rough mixing my focus will very much have been on Polo’s vocal. My natural tendency when doing final mixes would be to focus strongly on the vocal, but a few years ago I assisted Tillie Mann on some sessions (Mann featured in Inside Track in SOS une 2020 issue: www.soundonsound.com/techniques/inside-track-lil-baby-sum-2-prove), and he said: ‘I’ll work on the beat before doing the vocal. You have to make the beat hit hard and then make the vocal fit in with that.’ So now, before I get to the vocals, I get the beat knocking.

The very first thing I do when I start a mix is something I learned from Juro ‘Mez’ Davis, which is to bring everything down to ‑18dBFS. I do this with a plug‑in called HoRNet AutoGain 2.

“The very first thing I do when I start a mix is something I learned from Juro ‘Mez’ Davis, J Cole’s mixer (Mez featured in Inside Track in SOS September 2013 issue: www.soundonsound.com/people/j-cole-juro-mez-davis), which is to bring everything down to ‑18dBFS. I do this with a plug‑in called HoRNet AutoGain 2. Often the 808s are so crushed, and I don’t want clipping hi‑hats! So I bring everything down, and that gives me more headroom to work with. Also, most plug‑ins work best at ‑18dBFS.

“Also, as I mentioned earlier, I only got the stems for ‘Rapstar’ very late. Getting the stems of a two‑track often is an issue, and because the demos mean so much to Polo, when I do get the stems, I first spend time making them sound exactly like the two‑track, and then I look at what I can improve. If I had put a low‑filter or something like that on the two‑track in a certain section, I’ll have to recreate that, or more often than not, I just use the two‑track for that section, so it sounds exactly the same. Polo liked the two‑track mix of ‘Rapstar’ before I got the stems, so I by and large kept it as it was.” 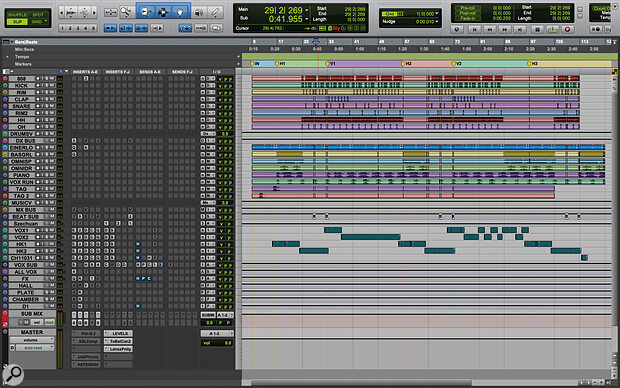 The entire Pro Tools Edit window for Todd Hurtt’s mix of ‘Rapstar’ fits comfortably on one screen. (Download the ZIP file for a detailed enlarged view.)

Hurtt’s Pro Tools mix session of ‘Rapstar’ is fairly small by modern standards, with only 16 beat audio tracks (eight drum tracks, and another eight music tracks with the ukulele and Omnisphere synths and so on), five vocal tracks, and a mix print track at the bottom. This adds up to only 22 audio tracks in total. Add another 15 bus, aux and master tracks, and the grand total of tracks is a modest 37.

“When I finally got the stems of the beat in, it sounded essentially the same as the two‑track. So, aware that Polo doesn’t like big changes, I only did a few things, like add an iZotope Neutron to the 808, and a few plug‑ins to the music tracks, like the Neutron again, and I did some EQ with the FabFilter Pro‑Q 3 and the [Brainworx] bx_solo for stereo width on the ukulele. Other than that it was just level adjustments. All the beat tracks go to the ‘Beat Sub’ [aux] track, on which I have the iZotope Ozone 9, doing pretty much the same as I had done on the two‑track. I’m using the Exciter and the Spreader, but most of all it’s about the low end.”

“The vocals are spread over five tracks, with two tracks being the verse, two for the hook, and the last the brief ad lib at the end of the song. It’s how we record his vocals, and the takes slightly overlap each other. All vocal audio tracks have the same plug‑in chain on the inserts: Antares Auto‑Tune EFX+, Oeksound Soothe 2, FabFilter Pro‑DS, FabFilter Pro‑C 2, FabFilter Pro‑Q 3, another Pro‑DS, and the Focusrite [Sound Radix] SurferEQ 2. I do the more subtractive stuff on the individual audio tracks, and then use the vocal bus to embellish things. 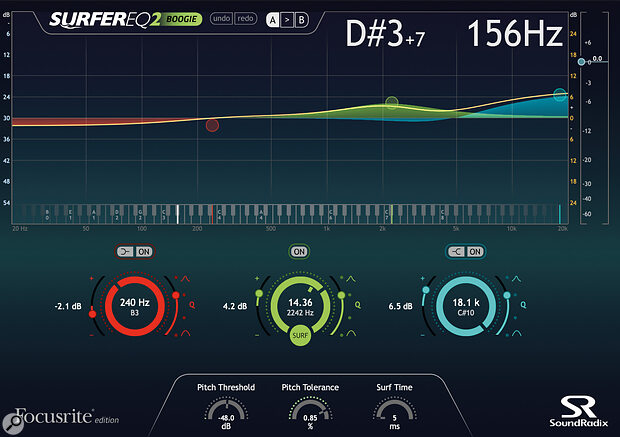 “We used a fairly basic version of Auto‑Tune because I set it to the sound Polo wants, and then we forget about it. Because Polo wants a particular sound, I don’t change it. The signal then goes to the Soothe 2, which takes out some harshness. I love that plug‑in. It’s so good for taking out very specific frequencies, and still being very transparent, and not affecting the sound. The FabFilter de‑essers and EQ cut more unwanted frequencies, and I love the Surfer, which is great for riding frequencies. I use it a lot on Polo’s vocals, because I normally only have one vocal to work with.

“All vocals go to the ‘Vox Sub’ [aux], on which I do most of the heavy lifting for the vocal effects. There’s the Waves SSL E‑Channel Strip, taking out some muddiness, Waves H‑Compressor, Ozone 9 Dynamic EQ, Waves C4, Waves CLA Vocals, Oxford Inflator and another de‑esser. There also are sends to the aux tracks. I used all of them, and they’re mostly the same as in my recording template. So it’s a hall from the Vintage Verb, a plate from the Renaissance Verb, a chamber from the Pro‑R, and a quarter‑note delay from the H‑Delay.

“I have to be careful how much I add, because Polo is not a fan of too many effects on his voice. It’s actually tough to work with just one fairly dry voice and make that sound great! Finally, just above the vocal audio tracks is a track called ‘Szechuan’, which is named after the sauce, and which is a parallel compression vocal track, with the Waves CLA‑2A. 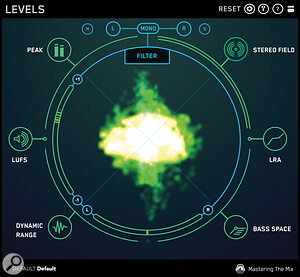 Mastering The Mix’s comprehensive metering plug‑in Levels helped Todd Hurtt keep the master output under control.“Everything ends up being sent to the ‘Sub Mix’ track, which again has the C4 — I could do an entire mix with just that and the SSL E‑Channel Strip plug‑in — a Pro‑Q 3, the Black Box Analog Design HG‑2, and again the Ozone 9. The Black Box is great for low end. It will beef up anything!

“The Master track had three plug‑ins for metering: the Mastering The Mix Levels, the Tonal Balance Control 2, and the Loudness Penalty. The Levels plug‑in is every single meter rolled into one, giving details of the stereo field, the bass space, the dynamic range, and so on. When your ears get tired, it tells you where you’re at. The MeterPlugs Loudness Penalty is extremely helpful because it tells you how your mix will be compressed on different platforms, like YouTube, Spotify, and so on!”

Originally from Michigan, Todd Hurtt started his music industry career far away from recording studios. “I played saxophone at high school, and learned about many aspects of making music. I was into big band jazz, Duke Ellington and things like that. I then went into competitive DJ’ing, which pushed me into the radio scene. I did not want to party every day; instead, I wanted to make music, and be behind the scenes. There are not that many places in the Midwest that have big studios, so I saved up and went to the Los Angeles Recording School (LARS). It was the first time I saw a large‑format console, an SSL 4000. This was in 2009.

“When I finished that school in 2010, I got an internship at Glenwood Place Studios. I worked my way up to assistant engineer, then engineer, and in 2016 I went to work at Paramount Recording, in Hollywood. Paramount only have independent contractors, so you work through them, but not for them. Even though I still work at Paramount, I’m also represented by Down Beat Management. I work mostly in hip‑hop, but also in other genres. For example, I worked on the Incubus album 8 in 2017 that was co‑produced by Skrillex.”