How I Got That Sound: Tim Palmer 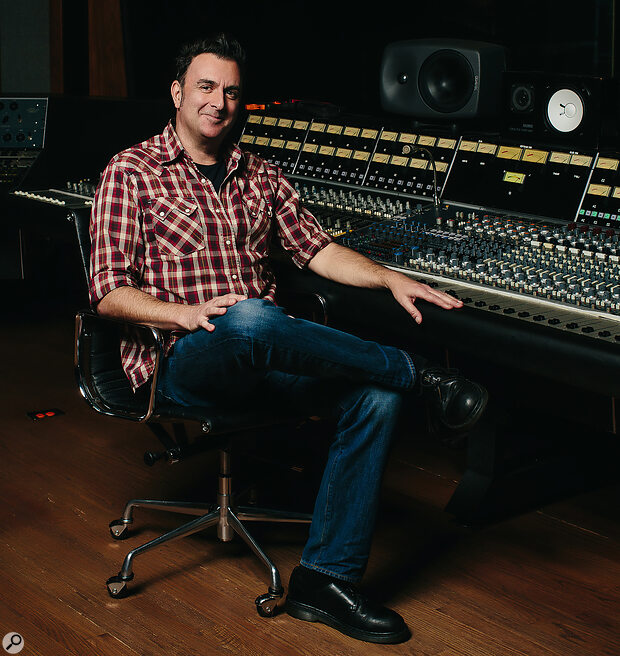 English producer and mixing engineer Tim Palmer began his career in the early ’80s as an assistant engineer, and by the time he turned 21, had scored his first number one as a mixing engineer with Cutting Crew’s ‘(I Just) Died in Your Arms’. He would go on to work with music heavyweights such as David Bowie, Robert Plant, Ozzy Osbourne, Goo Goo Dolls, HIM and countless others. Asked to nominate a favourite sound from his extensive career, he chose the song ‘Black’ from Pearl Jam’s hit debut album Ten, which he mixed in 1991.

“The intro to ‘Black’ starts off with a solo rhythm guitar played by Stone Gossard, which has a slight Rolling Stones feel to it. On top of that Eddie Vedder ad libs some vocals, then at the end of this intro piece, the band kicks in, with the bass sliding down into the verse and drums, guitars and vocals all entering together. At the beginning of the mixing process, when I turned up the faders, I immediately discovered I really disliked the intro as it was. I found the guitar sound they had recorded to be a bit flat, uninspiring and unrewarding. So I immediately began to think of ways of how to approach this section. I began to play around with the idea, and I’m not foolish enough to think that this was a particularly original idea, but I wanted to make the guitar sound as though it was coming through a radio or telephone speaker.

Tim Palmer: I thought the intro sounded really good like this, but the truth was, I hadn’t actually played the tape beyond the intro and into the verse yet.

“These days, that is something that is easy to achieve with plug‑ins — I’m particularly fond of the iZotope Vinyl plug‑in, and I also really like the Audio Thing Speakers. But back in those days, you had to recreate the sound of the speaker using the channel strip on whatever console you were on. In my case, it was a Neve VR60 desk at Ridge Farm Studios.

“So I proceeded by taking out all the low end, a lot of the top end and boosted all the mids on the guitar. I compressed it with a fast attack time to level it out, and basically emulated the sound of a radio speaker. It worked really well and because of the compression I really started to then hear the overtones and the harmonics of the guitar. I then pushed up the vocal and discovered that it didn’t work because it was a full‑sounding vocal over a radio guitar, so I treated the vocal in the same way and then there was some continuity to the intro.”

“When you are mixing a song, not only are you making decisions about the specific EQ of particular parts, but those decisions will have a relevance and will affect the section that immediately follows. I thought the intro sounded really good like this, but the truth was, I hadn’t actually played the tape beyond the intro and into the verse yet. So I finally let the tape machine play the song through the intro into the verse, and I was super‑happy with the effect it had achieved. Because the intro was so ‘lo‑fi’ and contained, it took up a small place in the sonic spectrum. When the bass guitar entered with its full frequencies, sliding down into the verse, the effect was fabulous. It was like a flower coming into full bloom. The band’s entry sounded huge in comparison to the radio intro.

“Fortunately for me, the band liked what I did. It was a classic case of necessity being the mother of all invention.”