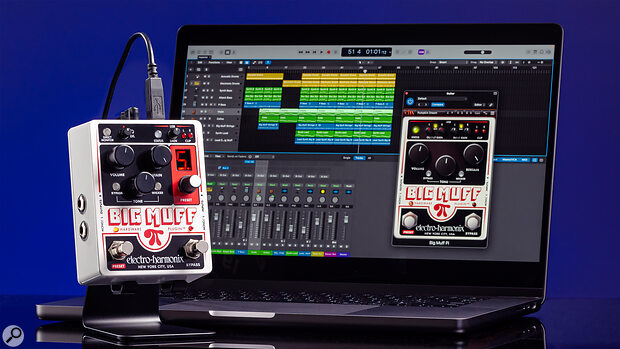 After connecting to a computer via USB, you can open the Big Muff Pi Hardware Plugin in your DAW. Rather than using software emulation, the audio is passed through physical clipping diodes, overdriven transistors and analogue circuitry to colour the sound. The circuit itself is a design of the renowned 1973 Violet Ram’s Head Big Muff, this classic pedal now adapted to run in true stereo. There are further colour controls for Tone Wicker and Tone Bypass, as well as ten footswitch-accessible presets that can be saved to the pedal itself, with unlimited preset slots available when using it with a computer.

In addition to its role as a fuzz unit, the Hardware Plugin can operate as a 2-in/2-out audio interface, which enables the user to record audio with or without the effect engaged. And away from a computer the Big Muff Pi Hardware Plugin can be used as a regular standalone effects pedal, powered by the supplied 9 volt power supply. To further expand the capabilities, Electro-Harmonix have included MIDI CC implementation via MIDI over USB for all the parameters on the pedal.

Available as either a VST, AU or AAX plug-in, the software is compatible with most DAWs, such as Pro Tools, Logic Pro X, Ableton Live, Reaper and more.

The Electro-Harmonix Big Muff Pi Hardware Plugin is available now with a USA street price of $328.90.