Published 24/12/07
New gear from M-Audio!
M-Audio’s latest audio interface is an eight-input, eight-output device with some clever DSP trickery lurking inside. In its rawest form, the Fast Track Ultra (below) can transmit six analogue and two digital channels of audio at up to 24-bit/96kHz to and from the host computer, using the USB 2.0 protocol.

Users can plug up to four microphones directly into the device, as well as line and instrument signals, and there’s stereo digital S/PDIF I/O, so you can connect your digital gear too. Six line-level analogue outputs enable the user to monitor multiple sources simultaneously or monitor in surround, and there are two headphone outputs, each with a dedicated volume control. There’s also a 1x1 MIDI interface.

But it’s the DSP engine at the heart of the Fast Track Ultra that’s most interesting. The device is equipped with eight independent DSP cores, which can be used to mix, route and add effects to signals. There are many practical uses for the system. For example, when recording a singer you could set up a reverb and route it only to the vocalist’s headphone mix, or set up a dedicated mix of input signals for a drummer.

The DSP is controlled by PC- and Mac-compatible software, but settings can be stored on the device itself. This means that you can use the Fast Track Ultra on stage without a computer. What’s more, the device can be powered by the USB connection, so if you are using a portable recording rig, you don’t need to plug in a power supply, although one is included. However, when in bus-powered mode, the I/O count is limited. The Fast Track Ultra is available now, costing £279. 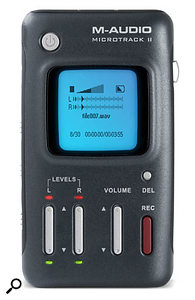 Also new from M-Audio is the MicroTrack II handheld audio recorder (left), an updated version of the MicroTrack 24/96, which was first launched nearly two years ago. Improvements to the new model include a wider dynamic range at the input stage, as well as a peak limiter, which helps to stop fast transients causing the unit to clip.

The device is now equipped with a USB 2.0 interface, allowing for higher data-transfer rates, and you can now record files that are larger than 2GB. What’s more, users can place markers in Broadcast WAV Files (BWFs) during recording, allowing for track start points in a live recording, for example, to be noted. The Microtrack II can record MP3s, at a variety of rates, and WAVs and BWFs at up to 24-bit/96kHz.

Front-panel controls are simple, with adjusters for input gain and output volume, as well as initiating record mode and switching the unit on and off. Buttons up the sides of the device provide access to the menu system and control functions such as screen brightness and key lock. The MicroTrack II is available now, for £229.