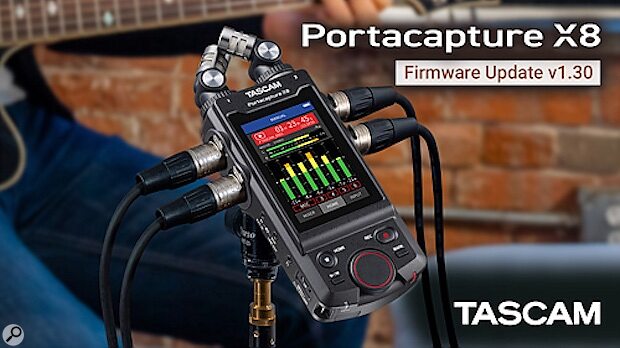 Tascam have announced a firmware update for their Portacapture X8 multi-track field recorder, bringing some significant enhancements to the already impressive device. For more information about the device itself, take a look at our in-depth review  from the May 2022 issue of Sound On Sound.

The headline feature of the update is that the device’s 32-bit float recording resolution is now available when using the recorder as a USB audio interface for a DAW, having previously only been an option when recording to the device itself. This facilitates a higher dynamic range than is possible with 16 or 24-bit resolutions, helping to avoid clipping during the recording process, and allowing for greater adjustments of a quietly recorded signal’s gain before encountering noise issues.

New memory capabilities for device and input settings have also been introduced in the update, with users now able to store up to three individual settings on the Launcher main interface as well as to up to three input presets for recording apps. This allows the most frequently used configurations to be easily defined and recalled quickly with the tap of a finger.

Another new addition comes in the form of a Mix Minus function that is available to use with the device’s Podcast app. This allows a USB audio source to be recorded and monitored by all participants, avoiding the audio feedback loop that would normal occur without such functionality.